August 29, 2019, AM Update – Hurricane Dorian is still expected to become a “dangerous” storm as it approaches the east coast of Florida over the weekend.  To make matters worse, new indications are that its motion will slow on the approach.  The slower the storm, the higher the storm surge on the coast and the greater the rainfall.

There is still a lot of uncertainty in the forecast track, as noted with the large cone in the chart below.  They are now forecasting up to a Category 4 hurricane right off Florida’s east coast. (Category 4 hurricanes have winds of 131-155 mph with storm surge of 13-15 feet.) 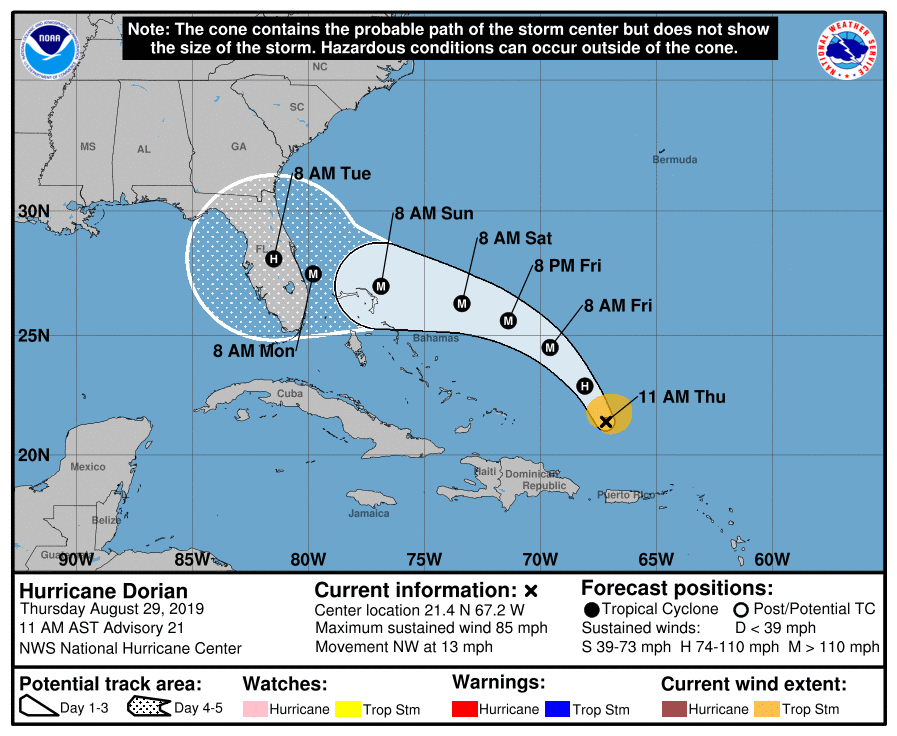 Several central and north-central counties (Sumter, Pasco, Polk, Dixie, and Taylor) report being saturated with water from recent rains and fear any additional rain from Dorian will create flooding, let alone a lingering soaker.  Sumter County has noted a lot of standing water and rivers at near action stage. 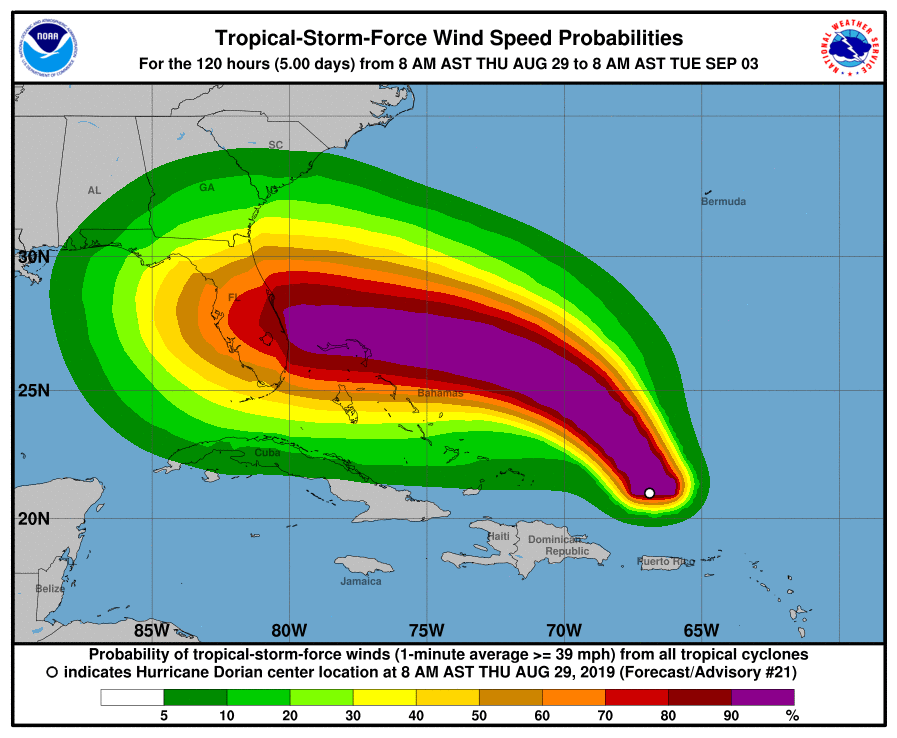 If it does come ashore mid-coast, it would be the strongest hurricane to hit Central Florida in more than 30 years.  Remember that Florida is a relatively narrow peninsula of a state: Orlando (metro population of 2.6 million) is only 55 miles from Cape Canaveral on the east coast.  Onward west from Orlando to Tampa (metro population 2.9 million), on the west coast, is only 85 miles.  Then it’s even warmer Gulf of Mexico water for as far as the eye can see in three directions.

The Florida Office of Insurance Regulation (OIR) has its Incident Management Team activated.  OIR has a dedicated seat at the state Emergency Operations Center to support response and recovery efforts.  We will advise of any OIR Orders that may be issued prior to or after the storm passes.

Florida Attorney General Ashley Moody says that as residents are busy stocking up on supplies, the state’s price scam hotline is open and there’s a new app people can download to report any price gouging.

Florida Division of Emergency Management (DEM) Director Jared Moskowitz said this morning that despite the uncertain path we are hearing in the news Floridians must be ready for a life threatening category 4 storm. Many Floridians may live in counties who have declared local states of emergency together with Governor DeSantis’ statewide Executive Order 19-189.  Preparations are underway for critical needs residents (those on oxygen or have challenges walking) to be moved to special needs shelters. Please look after your senior aged neighbors.

Emergency managers also report they are brushing up on recovery protocols, specifically, the new streamlined process for being reimbursed for post-storm recovery costs by the state and federal governments.  The system, utilizing FEMA e-filing, premiered last fall with Hurricane Michael.  It allows counties to estimate their recovery expenses, with the state of Florida paying half of those costs without the previous documentation that had been required – all in an effort to get recovery money more quickly to municipal and county governments.