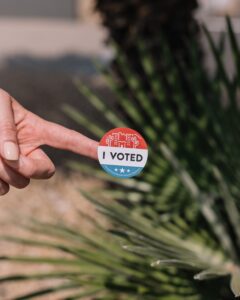 Photo by Phillip Goldsberry on Unsplash

We held our breathe and knew the Florida election was going to be hectic as nearly 9 million Floridians had voted early and by mail as of last Monday morning, which was close to the total number of ballots cast in the entire 2016 election.  By the end of the next day, Election Day, more than 11 million Floridians had voted, a whopping turnout of just under 77% – and it went off without any major hitches!

As the state with a reputation for ballot problems (the “hanging chads” of the 2000 Election and unfortunate instances since) what a welcome relief this election was!  Florida’s 67 election supervisors quickly counted the votes and Secretary of State Laurel Lee’s Division of Elections office was able to report near final totals by the end of the night.  Hats off to Secretary Lee and the Supervisors for their collaboration in conducting election-specific risk assessments in each county the past 12 months and working closely with those counties to mitigate and address all vulnerabilities that were identified at a statewide level to preserve the integrity of elections.  The result: a smooth election!

Republicans flipped five state House seats, coming one seat short of a supermajority and could pick up one state Senate seat, pending a recount.  Of the six proposed state constitutional amendments on the ballot, four passed and two failed.  The four that passed were #1 (requiring citizenship to vote), #2 (raising the minimum wage to $15/hour), #5 (extending Save Our Homes property tax provisions), and #6 (extending a Homestead tax discount to veterans’ spouses).  The two that failed were #3 (requiring a “top two” open primary) and #4 (requiring proposed constitutional amendments to pass twice).

Now comes the real work for our elected officials.