Plus the two-party AOB check 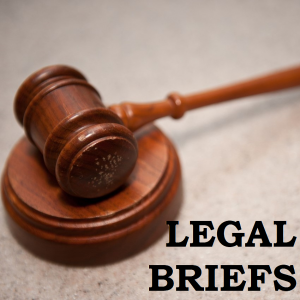 The Florida Supreme Court issued an opinion earlier this month that some believe will discourage the pursuit and awarding of punitive damages in Florida’s trial courts.  While in South Florida, an appeals court has shown that sometimes it’s easier for vendors to simply have the homeowner endorse the AOB check and call it a day.  It’s all in this week’s Legal Briefs.

Punitive Damages: The Florida Supreme Court approved an appellate procedure rule change that will allow defendants to file appeals during the course of the legal action – rather than waiting until the end of the trial to appeal demands for punitive damages.  The change, sought by the Supreme Court itself through a direction to the Florida Bar to study the issue, begins on April 1.

William Large, president of the Florida Justice Reform Institute, called the ruling a “game changer” in an Insurance Journal article that explored the Supreme Court’s action.  ““Prior to this rule change, parties had to wait until the conclusion of a trial to address the issue with an appellate court,” Large said. “Seldom did parties get to have an appellate review, because of insureds’ pressure on insurers to settle the case. Finally, defendants and insurers will be afforded the due process they have been lacking.”

Florida law limits most punitive awards to no more than three times the amount of compensatory damages or $500,000, whichever is greater. That threshold can go to four times the compensatory damages or $2 million in cases where the defendant persisted despite knowing the danger of their action and sought financial gain.  For cases of deliberate intent to harm, there are no limits on punitive damages.

Two-Party AOB Check: In the case of Expert Inspections vs. United Property and Casualty, the mold remediation company made repairs to water damages from Hurricane Irma, then submitted the invoice and a copy of the Assignment of Benefits (AOB) contract with the homeowner.  Although United paid the invoice in full, a year later the vendor sued for breach of contract and bad faith, arguing the AOB agreement required the check be made out to them, not to both them and the homeowner.  A circuit court ruled for the insurance company.

A three–judge panel of the Fourth District Court of Appeal agreed, noting in its ruling that the insurance check was sent well before the lawsuit was filed and that it was the insurance policy – not the AOB to which United wasn’t a party – that guided proper payment actions.  The panel found that United had followed the policy language and didn’t owe attorney fees.

“It was not unreasonable for the insurance company to make the check payable to both the insured and the assignee, particularly since the AOB agreement did not assign all of the insured’s interest in the insurance policy to the assignee,” according to the ruling.  It noted the vendor could have cashed the check simply by having the homeowner endorse it.