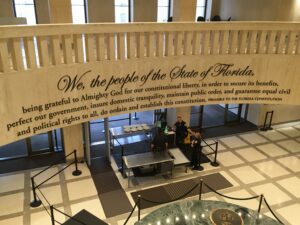 The last of the Florida Legislature’s six committee weeks ended on December 3 with little action on insurance issues, as we now prepare for the regular 60-day session to start January 11.  The big news was Governor DeSantis’ proposed $99.7 billion budget for the next fiscal year that begins July 1.  His proposals are about $2 billion less than the current year’s budget but still contain federal COVID-19 pandemic money, while maintaining $15 billion in reserves.  You can read more here.

While both the House and Senate committees that oversee insurance met, the agendas were light, with some tweaks to the Senate insurance omnibus bill (see SB 468 below), telehealth, and three open government sunset review bills that remove scheduled repeals of exemptions (SPB 7016, SPB 7018, SPB 7020).

On needed consumer insurance protections, we’re still awaiting bills to be filed that would:

Here’s the list of bills we’re following so far, with more to be added in coming weeks.  Updates from the last committee week within each bill are noted in blue font:

Insurance Policies Bill Name – SB 468 by Senator Keith Perry (R-Gainesville) would, among its many provisions, redefine the term “covered policy” under the Florida Hurricane Catastrophe Fund in relation to certain collateral protection insurance policies; authorize any association, trust, or pool created for the purpose of forming a risk management mechanism or providing self-insurance for a public entity to establish a quorum and conduct public business through communications media technology; authorize insurers to file certain insurance rating plans based on certain windstorm mitigation construction standards, if certain requirements are met, among other provisions.  The Senate Banking and Insurance Committee on December 1 unanimously passed a committee substitute bill that reflected the majority of debate at the meeting as to when the clock should start for insurance companies to respond to Legal Service of Process (LSOP) notices.  Current statute says the required 90-day response by the company starts when the notice is served to the Department of Financial Services (DFS).  During the pandemic, DFS got behind in processing the notices.  So the bill changes the start to when the company receives the notice from DFS.  The bill now goes to the Judiciary Committee.  A similar bill in the House, HB 503 has been filed by Rep. Tommy Gregory (R-Sarasota).

Building Inspection Services – HB 423 by Rep. Chip LaMarca (R-Lighthouse Point) revises eligibility requirements for building code inspector or plans examiner; revises special conditions that may be imposed on provisional certificates; authorizes partial completion of internship program to be transferred between jurisdictions & private entities; limits administrative fee that local jurisdiction can charge; provides certificate of occupancy or completion is automatically granted & issued; and requires local building official to provide written certificate of occupancy or completion within specified time.  The House Regulatory Reform Subcommittee on December 2 unanimously passed a committee substitute, with the next stop being the Local Administration & Veterans Affairs Subcommittee.  A similar bill in the Senate, SB 644 has been filed by Senator Jason Brodeur (R-Lake Mary).

Motor Vehicle Glass – SB 484 by Senator Linda Stewart (D-Orlando) targets Assignment of Benefits (AOB) abuse in the windshield repair industry, an effort that failed to gain traction last session.  The bill would prohibit motor vehicle repair shops or their employees from offering anything of value to a customer in exchange for making an insurance claim for motor vehicle glass replacement or repair, including offers made through certain persons, etc.  The bill awaits its first hearing in the Banking and Insurance committee.  There has been no companion bill filed in the House.

Citizens Property Insurance – SB 186 by Senator Jeff Brandes (R-Pinellas), which among other things, would allow surplus lines companies to do takeouts of Citizens policies, just as admitted carriers can do.  There has been no companion bill filed in the House.

Community Association Database – This is one of several bills filed in the aftermath of the Champlain Towers South condominium collapse that killed 98 people in June of 2021.  HB 329 by Rep. Nicholas Duran (D-Miami-Dade) requires the Department of Business and Professional Regulation (DBPR) to establish a searchable database of condominium and homeowners’ associations’ information.  This would include contact information of board members, community managers, articles of incorporation and the like, but also a copy of the annual budget and schedule of expenses and assessments.  It must specify whether the association has reserve accounts for capital expenditures and deferred maintenance, and if they are fully funded.  A copy of the most recent reserve study, if one has been conducted, would also be included in the database.  A similar bill, SB 642, was filed in the Senate, by Senator Ana Maria Rodriguez (R-Miami-Dade).

Condominium Associations – Another bill following the Surfside condo collapse, SB 880 by Senator Jason Pizzo (D-Miami), would expand the jurisdiction of DBPR in investigating complaints about condo associations.  It would also revise criminal penalties on acceptance of things or services of value or kickbacks, specify acts that comprise fraudulent voting activities relating to association elections, and require an association provide an itemized list and a sworn affidavit to persons requesting to inspect records.  There has been no companion bill filed in the House.

COVID-19-related Claims – This is one of several bills addressing the ongoing coronavirus pandemic.  SB 610 by Senator Jeff Brandes (R-Pinellas) would extend current COVID-19 liability protections for health care providers through December 2023.  Another Senate bill, SB 7014 originated by the Judiciary Committee was approved as a proposed committee bill in its November 30 meeting and recognizes the same need and extends the protections against claims filed before June 1, 2023.

Communicable and Infectious Diseases – Citing this act as the “Sergeant Justin White Act,” SB 774 by Senator Joe Gruters (R-Sarasota) provides a presumption to specified workers that an impairment of health caused by COVID-19 or an infectious disease happened in the line of duty; requires certain actions in order to be entitled to the presumption; and requires emergency rescue or public safety workers to file an incident or accident report under certain conditions.  There is an identical bill in the House, HB 117 by Rep. Elizabeth Fetterhoff (R-Deland) and Rep. Anika Omphroy (D-Lauderdale Lakes).

Telehealth – SB 312 by Senator Manny Diaz (R-Hialeah) revises the definition of the term “telehealth” and narrowing the prohibition on prescribing controlled substances through telehealth to include only specified controlled substances.  The bill passed unanimously in the Banking and Insurance Committee, its second stop, and is now in the Rules Committee.  There is a comparable bill in the House, HB 17 by Rep. Tom Fabricio (R-Miramar) and Rep. Mike Giallombardo (R-Cape Coral).  It is awaiting its first committee hearing.