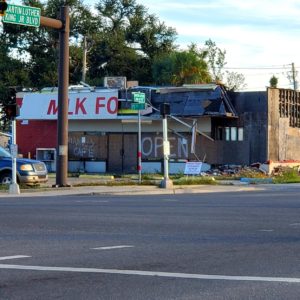 Hurricane Michael insurance claims are still a topic of discussion at the state Capitol.  This past week there were several articles that saw momentum swing from blaming insurance companies to instead blaming public adjusters and plaintiff lawyers as the obstacle to resolving open claims.  New reasons have also come to light.

As we reported in the last newsletter, total claims number just under 150,000 as of the end of September, with 11.6% (17,347) open.  More than half were re-opened claims (which is typical as more damage or greater estimated costs are discovered during repair).  New claims are being filed daily, one year post-storm, in loss creep that should come as no surprise after our similar experience with 2017’s Hurricane Irma claims.  Florida law allows policyholders to file claims up to three years after a hurricane.

Greg Thomas, Director of Consumer Affairs Division for the Florida Department of Financial Services (DFS), listed these reasons why homeowners aren’t getting their claim money, in his testimony before the last House Insurance and Banking subcommittee meeting:

Thomas’ conclusion: “There’s blame to be had all around in why these claims are still hanging out there.  From the consumer’s standpoint, it’s all a delay and it is.  They’re not getting their house fixed.  But it’s not necessarily the fault of the insurer in those cases, it’s somebody else,” he testified. 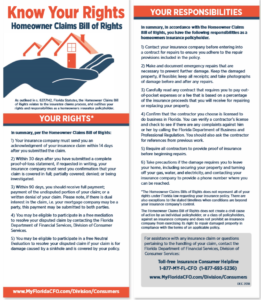 It also bears repeating that existing law in the Florida Homeowner Claims Bill of Rights states carriers have to pay the undisputed part of the claim within 90 days.  All of the recent news reporting has been wrong…for some reason the “90 day” law has been reported by the media incorrectly indicating an insurance company can simply withhold all claim funding when they don’t agree with the estimate.  We will be in touch with reporters to educate them and encourage our elected officials and regulators to do the same.  Companies that testified at recent hearings are following the law, while noting the high cost and delays of litigation keeping claims open.

We made some informal calls this week about the results from the current claims data call that OIR has pending that is due this week.  One Florida domestic company shared that 95% of its Michael claims are closed.  Of the 300 open claims, 176 had an attorney or a public adjuster or both.  The remaining open claims you can bet they are trying to resolve, but note difficulty when policyholders don’t provide all information requested in the process.

Insured losses from current claims total $7.1 billion, but estimated losses are $10-12 billion, so there’s a lot of road left on this trip folks. In fact, the slowest rates of paid closed claims are in the commercial and business interruption lines, where claims tend to be much larger than residential ones.  We’ll be watching and keeping you informed.