Effects as far as the Keys & Atlantic

The 2010 BP Deepwater Horizon oil spill may have impacted an area 30% larger than originally believed.  That’s the conclusion of a new report from the University of Miami whose studies show the toxic crude reached further west to Texas Shores and further east toward Tampa and south to the Florida Keys and then into the Atlantic Ocean.

An explosion at a British Petroleum oil rig on April 20, 2010 created an ongoing oil discharge in the central Gulf of Mexico that lasted 87 days and dumped 200 million gallons of crude into the water. Eleven workers died in the accident.  Oil slicks covered an estimated 92,584 square miles (roughly an area equivalent to about 300 miles by 300 miles).  At the time, scientists used satellite and aerial imagery, along with field tests and sampling to determine the spill’s reach and then established fisheries closures.

Now, a decade later, researchers at the University of Miami’s Rosenstiel School of Marine and Atmospheric Science, have found discrepancies between the imagery and the field data.  Their report, Invisible oil beyond the Deepwater Horizon satellite footprint show accumulating field data support a much wider extent of the spill beyond the satellite footprint, reaching the Texas Shores, the West Florida Shelf off Tampa, the Loop Current system that operates between the Gulf of Mexico and the Atlantic Ocean, and the Florida Keys (see maps). 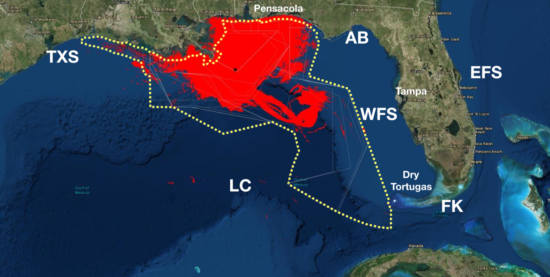 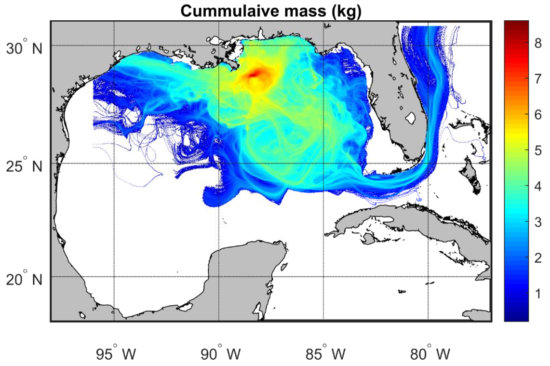 Specifically, in the West Florida Shelf, their studies indicate high concentrations of oil, including toxic and mutagenic levels, in the water, in sediments, in sand patties, and on the coast.  They also report high levels of polycyclic aromatic hydrocarbons (PAHs) from the spill were found in red snappers’ livers, which co-occurred with a high frequency of skin lesions in bottom-dwelling fish.

The study found that while some initial modeling after the spill provided possible scenarios of its extent, a robust spatiotemporal examination to resolve toxic and nontoxic concentrations of oil, wasn’t performed.

“Similarly, the relationship between satellite detection and in situ oil concentrations was rarely examined.  This is a key point because satellite detection is the main source of information used for determining the oil spill extent and the corresponding management actions, e.g., fishery closures,” the report states.  “Having the capacity to quantify the toxic-to-biota extent, which is not necessarily equal to the satellite-detected extent, would improve the understanding and, therefore, the management of oil spills.”