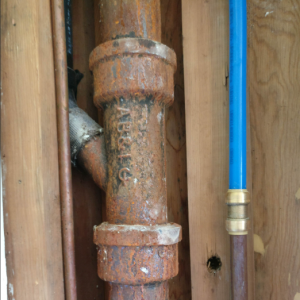 We’ve compared efforts to stop Florida’s decade-old insurance litigation crisis to a perverse game of “whack-a-mole” where as soon as one fraudulent practice is legislated or regulated out of existence, another pops up to take its place.  The newest questionable practice: cast iron drainpipes.

The Insurance Journal’s William Rabb reports this revelation came to light at last week’s Florida Defense Lawyers Association conference in Orlando.  It appears that these usually durable pipe systems that are common in homes built before 1975 have become targets of some of Florida’s largest plaintiff law firms.  “It’s possible the pipes could lead to many more claims and suits in coming years, after Florida lawmakers took action designed to reduce roof claims and litigation,” according to the article, which was based on conversations with insurance attorneys, adjusters, and engineers.

The fact is that these pipes have been in use for more than a century and although they can rust a bit and develop deposits inside that can constrict the flow of drain water, they often don’t require full replacement, something that can cost upwards of $100,000.  Yet, according to the article, a growing number of claims have attempted to capitalize on a pipe’s age, with the help of cooperative plumbers with a vested interest in doing the replacement work.  An expert said in many cases, the leak and subsequent mold is instead from years of leaks in plastic sink drains or supply lines, or from around the edge of the basin.  The article discusses in great detail the ways insurance companies can cross-check these claims to counter questionable causes of damage and excessive costs – and successfully defend them if they end up in court.

The “whack-a-mole” game started in the early 2000’s with questionable mold claims, then moved on to sinkhole claims, then Assignment of Benefits (AOB) abuse, and most recently in the past three years, roofing/water claims.  Now apparently, it’s finding new opportunity in homeowners’ cast iron drainpipes.