While courts around Florida have been conducting tens of thousands of individual hearings via Zoom videoconferencing during the coronavirus, actual trials had been on hold – until last week.  The first civil jury trial was held in South Florida’s 11th Judicial Circuit in Miami-Dade County, in what could serve as a model for the rest of the state courts.

The case involved a homeowners insurance dispute between a carrier and its policyholder.  Jury selection took place via Zoom and was livestreamed on YouTube for the public to watch.  If you go a few minutes into the tape, the insurance company’s lawyer is asking potential jurors how many of them read their policy cover to cover.  There’s some interesting answers.

For Voir Dire, Zoom is an opportunity to actually see what the potential juror’s home/office looks like, providing further potential insight into the juror’s background and perhaps predisposition toward the case at hand.

The trial itself was held in person at the Miami Courthouse.  Once temperature-checked upon entering, all trial participants were spaced six feet apart with mandatory face masks.  They were also provided gloves, hand sanitizers, and individual evidence notebooks.  A Plexiglas shield separated the witness stand from the rest of the courtroom.  Lunch was provided, as no one was allowed to leave the building until the end of the day.  The trial was also livestreamed given the courthouse is officially closed to the public. 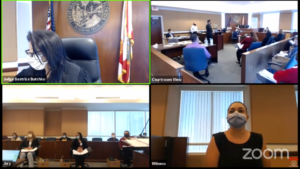 The 11th Circuit is the first of five judicial circuits in the state chosen by the Florida Supreme Court in a pilot program to test virtual jury selection and limited in-person trials.  All jury trials had been suspended since March through July 2, to help prevent the spread of the coronavirus.  A final report on the success of the pilot program is due in October.

The 11th Circuit is considering its next civil jury trial, but officials say it’s not possible to resume their pre-pandemic caseload of 10-15 trials on any given day at the courthouse.  While “justice delayed can be justice denied” these are extraordinary circumstances that the court is trying to work through.  One silver lining of the virus driving courts online is that insurance lawyers and others will have the instructive opportunity to watch other insurance cases in their spare time and maybe gain insight they can apply to their own cases.