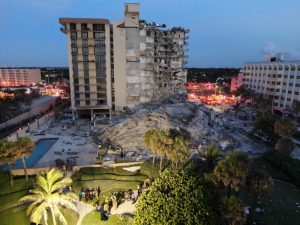 At the Florida Chamber of Commerce annual Insurance Summit earlier this month, a panel discussion on the Champlain Towers South condominium collapse made clear that it’s going to be awhile before we know both the cause of the tragedy and the real impact it may have on Florida’s commercial residential insurance writers.

While it will certainly take another year for building experts to determine the cause, it may take up to two years, according to James Schock, the Chairman of the Florida Building Commission.  In the meantime, as we noted in this edition’s Bill Watch, there are several bills filed for the upcoming legislative session that seek to further regulate condominiums.  But these are mostly in the area of condo association governance and requiring transparency on whether reserve accounts exist for building maintenance and how much they are funded.  Specific bills requiring more re-inspections or establishing maintenance standards may not be offered until the 2023 session when the cause of the collapse is known.

In the meantime, some insurance companies have reportedly reduced their condo writing, with one broker describing the market as “terrible.”  There was speculation on the panel whether this will result in more condo associations and unit owners seeking policies from Citizens Property Insurance.  Citizens, as we reported in the July 26 newsletter, already thought about that and has beefed-up its own underwriting requirements through increased inspections and enforcing eligibility requirements for properties.  Panelists said that could make it harder for some questionably maintained condos to find coverage.  We talked to three condominium residential agents last week and among them, they had three condo associations that could not find coverage.  The old adage that excess and surplus lines will insure anything at any price is not true for now.

The collapse hasn’t steered many way from buying condos.  The real estate market in South Florida is doing extraordinarily well, despite concern the Surfside collapse would scare away potential buyers.  The Miami Association of Realtors reports third quarter condo sales almost doubled from the same period last year in the eight oceanfront communities of Miami-Dade County.  Condo sales totaled 1,672, up from 854 in the third quarter of 2020.  Median sales prices are up, too, by as much as 34% in some communities.  Experts say increased demand for housing created by the coronavirus pandemic is contributing to the surge in sales.