Are PAs too cozy with vendors? 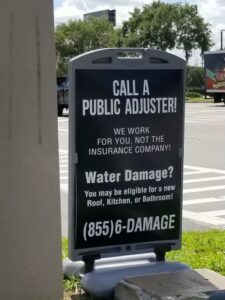 One insurance company is fighting back against questionable vendor practices by asking regulators to weigh-in on whether a Florida law prohibiting public adjusters from conflicts of interest with contractors applies to the company’s current claim activity.  The case may involve hundreds if not thousands of Florida homeowners.

In his recent blog PUBLIC ADJUSTERS—All in the Family, respected insurance industry consultant Scott Johnson reports that Universal Property & Casualty Insurance Company has filed a Petition for Declaratory Statement with the Florida Department of Financial Services (DFS).  Universal notes that several public adjusters seem to be working hand-in-hand with their wives or sons who run water mitigation or mold remediation companies.  Universal says it routinely receives claims reported by the public adjuster for the same loss as invoices it receives via Assignment of Benefits (AOB) or Direction to Pay (DTP) by the related vendor clean-up companies.  In fact, Universal says its audit shows that the public adjuster retained in these claims are the same in the vast majority if not all the claims reported.

At question – and what Universal wants DFS to weigh-in on – is application of Florida Statutes section 626.8795, which states: A public adjuster may not participate, directly or indirectly, in the reconstruction, repair, or restoration of damaged property that is the subject of a claim adjusted by the licensee; may not engage in any other activities that may be reasonably construed as a conflict of interest, including soliciting or accepting any remuneration from, of any kind or nature, directly or indirectly; and may not have a financial interest in any salvage, repair, or any other business entity that obtains business in connection with any claim that the public adjuster has a contract or an agreement to adjust.

Speaking of questionable claim activity, we received the image up top this week from an alert reader.  Look and sound familiar?  And we wonder why claims and loss costs are through the roof?  The fact is there is no such thing as a free roof, kitchen, or bathroom.  In the end, someone pays, and in Florida that cost is being borne by the 90% of homeowners who aren’t involved in such questionable claims.  (For more, visit our LMA AOB & Insurance Litigation webpage.)

Up in New York, the state legislature has had enough of such practices.  It recently amended 11 NYCRR 25 to require public adjusters disclose their personal and professional interests in their written compensation agreements with policyholders. Specifically, it prohibits PAs from referring the property owner to a vendor for repair work or other services without disclosing it, either beforehand or afterward, in order to receive their compensation.