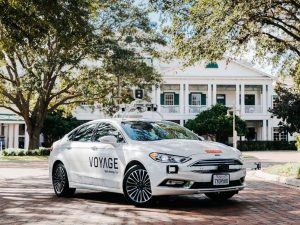 The Voyage autonomous vehicle in The Villages, Florida. Courtesy, Voyage

The Automated Vehicles Symposium was held earlier this month in Orlando and provided a great update on where we are in the testing – and ultimate commercial availability – of fully automated vehicles on our roadways.  Even the relocation of this annual international conference from San Francisco to Orlando was a tip-of-the-hat to Florida for its leadership in promoting automated vehicle (AV) technology and testing.

Florida was one of the first states to allow the use of vehicles in autonomous mode on public roadways. Through the leadership of Senator Jeff Brandes (R-Pinellas) and others, Florida has been heavily involved in AV development and testing, including the new SunTrax state-of-the-art transportation technology testing facility at Florida Polytechnic University.  It’s fast becoming a high-tech hub for research, development, and testing of all emerging technologies, including tolling, intelligent transportation systems (ITS) and AV and connected vehicles.  Florida has also been a testing ground for driverless auto insurance.

Introduced as “the father of automated vehicles in Florida,” Senator Brandes gave welcoming remarks at the conference.  He noted that there currently are 22 different deployments of connected vehicle and autonomous vehicle technologies across Florida.  “The Florida Department of Transportation has been taking these meetings for years.  It’s great to be able to pick up the phone and talk to DOT as it’s not their first conversation talking about autonomous vehicles throughout the state,” said Sen. Brandes.

HB 311, signed into law last month, is the third piece of comprehensive AV policy passed by the Florida Legislature in as many years.  It represents the on-going quest to balance proper regulation with encouraging Florida’s developing AV market.  It allows fully autonomous vehicles to operate regardless of the presence of a human operator; provides that the automated driving system is deemed the operator when the system is engaged; authorizes the Florida Turnpike Enterprise to fund and operate test facilities; provides requirements for on-demand AV networks to operate; and revises registration requirements for AVs. The new law also stipulates that Florida residents will be allowed to hire self-driving cars through digital phone apps, such as Uber and Lyft.

Remaining challenges to getting these AV’s commercially available and on the road?  According to Chris Urmson, co-founder of Aurora, an AV hardware and software provider, it’s safety and the perception of safety.   Urmson told the conference that safety includes not only producing vehicles that don’t collide with objects they shouldn’t but are also protected from cyber-hacking, given the greater amount of computer technology onboard.  The perception of safety has to do with convincing the driving public conclusively that these vehicles have been vigorously tested and are indeed safe.  Commercial production, he said, is not far away.

Also last week, Governor DeSantis announced that electric vehicle charging stations will be available or under construction at all Florida Turnpike service plazas by the end of the year.  Other major Florida highways will follow.