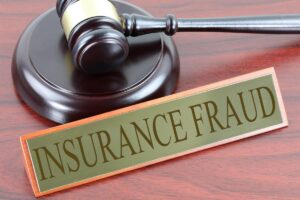 A Florida landlord is accused of illegally making money on the side – to the tune of more than $200,000 – by taking out life insurance policies on her tenants and cashing-in when they died.  Florida Attorney General Ashley Moody last week announced the arrest of Joyce Small for allegedly orchestrating a life insurance fraud scheme that had the potential to defraud almost $2 million in death benefits from eight insurance companies.  Small allegedly collected more than $211,000 in life insurance benefits from policies fraudulently obtained by stealing personal information.  Her victims include not only current and former rental property tenants, but acquaintances, friends and family members.

“This conniving criminal exploited relationships and the trust placed in her as a landlord to rip off insurance companies,” said Moody in a release.  “We will not stand by while criminals target Floridians and devise schemes that ultimately harm all ratepayers when insurers have to raise rates to account for this type of fraud.”

Between 2005 and 2018, Small allegedly obtained 33 life insurance policies on 29 individuals without their knowledge nor their relatives.  Small, who owns rental properties along the eastern coast of Florida from Miami Dade County to Flagler County, allegedly stole some of the victims’ data through information received from her tenants’ rental applications.  The investigation revealed that Small strategically chose victims based on those perceived to be in poor health, aging, or who had little to no family members in the area.  The Attorney General’s investigators, joined by fraud investigators from the Department of Financial Services, determined Small used eight different life insurance companies to secure the fraudulent life insurance policies.

Her $211,000 in benefits to date resulted from the death of five individuals she obtained policies for.  If all 29 victims had passed away before law enforcement stopped the scheme, Small stood to obtain death benefits of an estimated $1,985,000.  Small is charged with one count of insurance fraud, one count of organized scheme to defraud, and five counts of grand theft.  The Office of Statewide Prosecution will prosecute the case in the 15th Judicial Circuit of Florida in Palm Beach County.

We applaud this effort and encourage the same strong action against those who are perpetrating similar fraud in the property insurance arena.   A report by the Office of Program Policy Analysis and Government Accountability (OPPAGA) shows that homeowners insurance fraud referrals to the Department of Financial Services more than doubled over a five year period of 2015-2020.  Yet few resulted in full investigation and even fewer in prosecution.