The Atlantic hurricane season is already off to a fast start, with our first tropical system behind us, and there’s encouraging news that Floridians are taking the threat of hurricanes more seriously this year.   The state Division of Emergency Management has added staff, the state’s sales tax holiday on hurricane supplies is in full swing through Thursday, and we have “Lisa’s Lucky 7 Hurricane Season Prep” to get you off on the right foot! 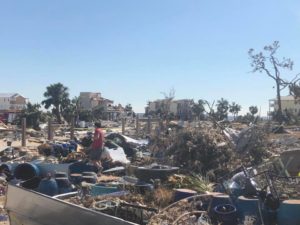 A new AAA scientific survey of 400 Florida residents shows that 92% are worried about the 2019 hurricane season, with one in five more worried than they were last year.  Nearly 75% say they’ve made preparations for hurricanes and other severe weather.  Should an evacuation be ordered though, 21% said they’d ignore the warning.  The rest would evacuate, but most of those would only leave for a Category 3 hurricane or greater.  As for flooding, 57% said they are “somewhat” or “very” concerned about their home being flooded.  Yet in Florida, only 17% of properties have federal flood insurance.  A growing number are choosing private flood insurance.

Of course, last October’s Hurricane Michael, which struck a devastating blow to the Florida Panhandle with its Category 5 winds of 160 mph and 15.5 foot storm surge is fresh on most folks’ minds.  That’s one we won’t soon forget.  Irma hit in 2017 and Matthew in 2016, breaking our string of 10 consecutive hurricane-free years.  The legislature has funded an additional 20 personnel to work in the state Division of Emergency Management (DEM).

DEM Director Jared Moskowitz has noted one of the lessons from Hurricane Michael is the added complications and strife created when cellphone service goes down – and stays down.   Almost half the cell sites in Bay County were still down a week after Michael’s landfall.  During his recent trip to Israel with the Governor and Cabinet, Moskowitz told the Tallahassee Democrat newspaper that the Israelis send warnings out to all cellphones in a particular area during emergencies.  “That’s something that’s obviously different for our culture – in emergency situations making sure people are aware, not optionally but mandatory, so that they have the information to help make decisions.  That’s something obviously that we’ll continue to look at,” he said.

DEM and its AlertFlorida system provides these mobile warnings.  LMA client Everbridge is the engine behind the system, offering critical event management solutions.  You can visit https://floridadisaster.org/alertflorida/ to sign up for alerts from your area and download the Everbridge App from the Apple or Android stores.

To prepare you and your clients and colleagues for hurricane season, we’re pleased to present Lisa’s Lucky 7 Hurricane Prep, a fun way to kick off what we should always assume will be a serious season here in Florida and throughout the Southeast.  This whimsical yet practical 7-point list of reminders will help you and yours prepare for the season – with our compliments from Lisa Miller & Associates.  One of the most important things our firm can do is not forget that storm season comes EVERY year and we need to prepare like a storm is going to happen tomorrow! 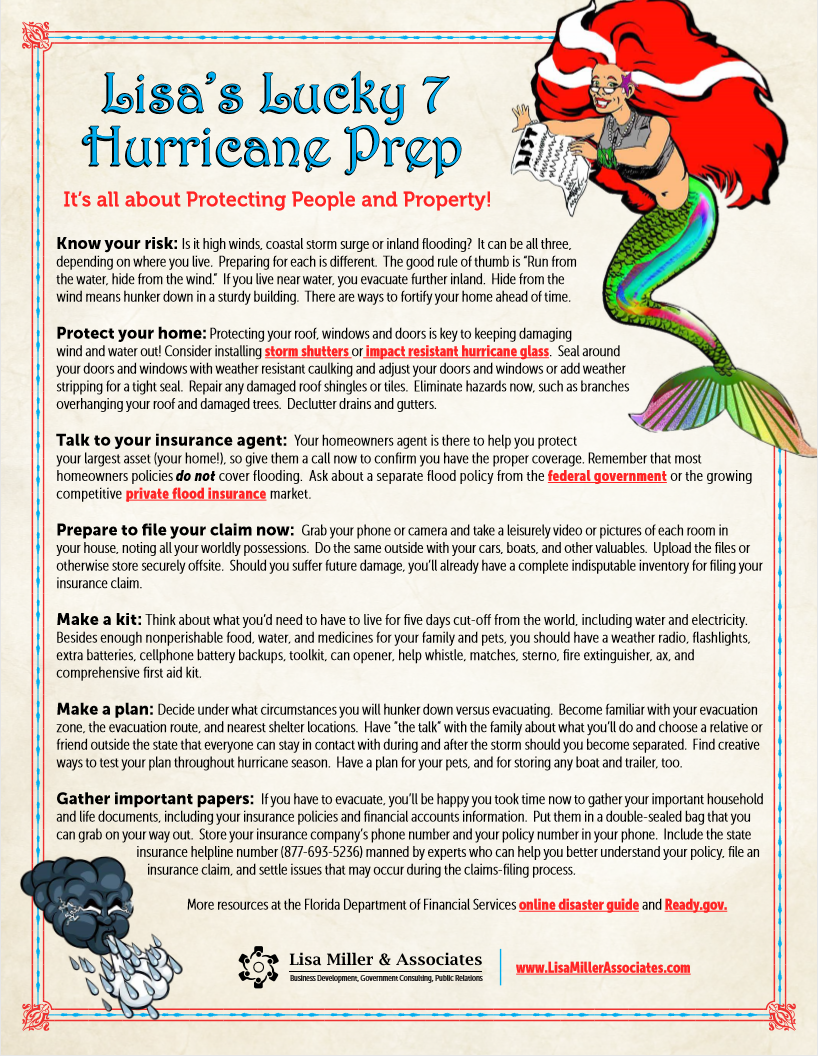 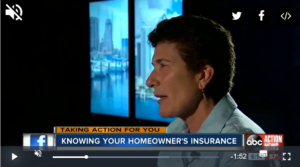 We’re also sharing our expertise with insurance consumers across the state through our relationships with key television stations and other news media.  Tampa Bay’s ABC Action News story last week on “What’s in your insurance policy” going into the hurricane season, included my interview with practical tips and a timely reminder that flooding isn’t covered in typical homeowners policies.  The segment was included in the station’s “StormWatch 2019” half-hour primetime special last Thursday evening. 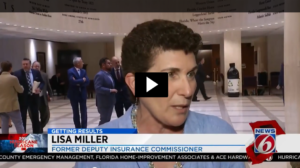 Likewise, Orlando’s Channel 6, season-eve special included this story with my interview on easing the insurance claims process post-storm and featured some of my pictures of post-Michael damage. Emmy award-winning investigative reporter Mike Holfeld has long been a champion of helping his viewers be prepared because he knows that storms don’t avoid inland Orange County and surrounding Central Florida.  The station used our “Lucky 7” tips in their own story last month here together with a nice online spread.  We are happy to have helped.  Knowledge is power!