‘One day’ is sooner than you may think

Call it “The Jetsons” meet “Miami Vice”.    A luxury high-rise condo set to open later this year in downtown Miami has been built to include a “flying carport” for future flying cars.  It will allow residents to take-off and land from the roof and go right into their condos.  And that future is now today – a flying car just hit the market.  Auto insurers, hold onto your seats for this rating adventure.

The flying carport is being built atop the 60-story Paramount Miami Worldcenter luxury condo tower, located across the street from the American Airlines Arena.  The tower is part of the massive 27-acre mixed-use Miami Worldcenter site.  Condo developer Dan Kodsi has built an observation deck for residents that will double as a sky lobby for his “SkyPort” of airborne commuters. One of the swimming pools below is being fitted with a moveable floor, which will rise to serve as a take-off and landing pad, according to Kodsi.

Here’s an awesome video and animation of the building construction in progress and the flying car.   These flying cars are known as vertical takeoff and landing vehicles (VTOL).  Dutch builder PAL-V is already marketing these cars that can also fly, starting at $400,000.  Uber announced last year that it plans to get into the VTOL market for its networked transportation service.  Given Florida’s reputation as a great test track for automated vehicle (AV) technology, we wouldn’t be surprised to see these VTOLs one day soon, too. 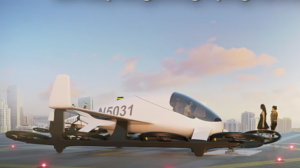 Besides the flying carport, the Paramount Miami will include the country’s first outdoor soccer field to be featured in a high-rise residential development.   For our architectural and design clients, this is clearly a feast for the eyes and proof of the building and social innovation at work (and play) here in Florida!