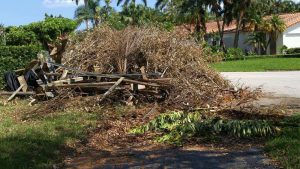 While the Panhandle awaits the bulk of promised disaster relief funding for Hurricane Michael recovery, long-awaited Hurricane Irma reimbursement checks are finally being received in South Florida.  The Governor announced the state has sent $78.1 million to Miami-Dade County to reimburse the county for debris removal in the months following Irma’s September 2017 landfall.

In the 21 months since Irma struck, local governments have complained to the Florida Division of Emergency Management (FDEM) that flow-through disaster money from the federal government to the state of Florida has been slow to be released or just non-existent.  It’s put a severe pinch on municipal budgets and delayed needed recovery.  Many municipalities had to borrow money in the interim, some just for interim repairs.

“When I took over at FDEM, Governor DeSantis directed me to speed up the reimbursement process to make sure that Florida counties and cities received the money they are owed,” said FDEM Director Jared Moskowitz, in a statement. “Cities and counties have waited too long to replenish their reserves or repay loans from Irma but with today’s announcement we are showing that the Governor’s policies are working and funding has been accelerated.”

In January, FDEM implemented new procedures to accelerate FEMA reimbursements to communities impacted by hurricanes Irma, Matthew and Hermine. Previously, the Division required projects to be 100-percent validated before any funding was awarded. Under the new process, half of the funds are awarded when a project is 50-percent validated, while the Division continues to work with applicants to provide funding as projects continue to be validated. This process is in addition to expedited payments for communities impacted by Hurricane Michael, according to FDEM.

State leaders are finally recognizing that too much time passes from the storm’s strike to the release of funds designated for rebuilding.  In Irma’s case, almost 2 years passed before any sizeable sums were released to affected communities.  Let’s hope our Panhandle communities, many in already designated fiscally constrained counties, fare better in their recovery reimbursements.