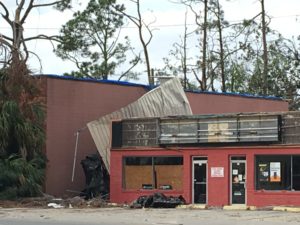 The long, slow recovery continues in Florida’s Panhandle from Hurricane Michael.  Although some additional funding has become available, the wait for substantial relief continues, while the cost estimates keep rising.  It’s been nearly five months since the Category 4 storm struck, killing 43 and etching a sixty-mile wide path of destruction from Mexico Beach on the coast to the Georgia state line.

The federal budget passed by Congress last month did not include $10 billion in long-term assistance that was supposed to go to Florida and other states hit by natural disasters over the past year.

Panama City Mayor Greg Brudnicki was on NPR saying debris cleanup in just his city is expected to total more than $100 million.  But so far he says he hasn’t seen any reimbursement monies from the state or federal governments.   The Florida legislature begins its annual session tomorrow with more than 200 bills filed that would fund immediate and long-term relief and recovery efforts in the impacted 14-county area.  But any approved funding wouldn’t begin to kick-in until the start of the next fiscal year on July 1.

Damage estimates came this week from the Florida state prisons that took a big hit from Michael.  Twenty correctional facilities in 15 counties suffered about $50 million in damage.  Some facilities are temporarily closed, with inmates moved to other prisons.  It’s unclear how much of that amount may eventually be reimbursed by the federal government. 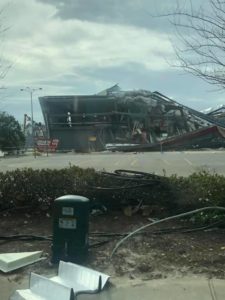 There are positive developments to report.  The board of Triumph Gulf Coast, charged with administering the state’s $2 billion BP oil spill settlement fund, last week voted to provide $15 million to the coastal counties of Bay, Gulf, Franklin, and Wakulla to cover up to 50% of projected property tax losses by local governments due to the hurricane.

Visit Florida, the state’s tourism arm, has given Panama City and Panama City Beach a $250,000 grant each to boost spring marketing campaigns to let tourists elsewhere know that the beaches are open and ready for their business this summer.

Insurance claims from Michael so far total 142,580 in Florida, with an estimated insured loss of $5.8 billion, a figure that’s expected to grow to $10 billion before the last claim is paid.  Nearly 78% of claims are closed (of those, 84% were paid and 15% unpaid).

FEMA is reminding residents who are uninsured or underinsured that they may be eligible for help to restore their homes to a basic safe, sanitary, and functional condition.  Meanwhile, it continues to provide rental assistance to nearly 20,000 residents in the core six-county swath of the storm.

For those areas where rental units are scarce, FEMA is now providing nearly 500 trailers at various group sites and commercial parks, mostly in Bay County, with another 42 on order for Gulf County.  They’ve placed another 291 trailers directly on survivors’ properties throughout the region.  Operation Blue Roof counts 7,602 homes with blue tarps, representing residents able to live in their homes while awaiting permanent repairs.

“Long-term recovery groups” are picking up where FEMA and the state of Florida are leaving off, in providing ongoing relief to residents.  These groups include non-profits and churches and are forming in each of the 14 impacted Panhandle counties to provide a variety of assistance.  For more information and to help out, visit Florida Voluntary Organizations Active in Disaster. 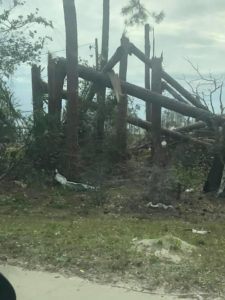 Meanwhile, the cost of 2017’s Hurricane Irma continues to rise, now 26% higher than originally estimated, according to the London insurance brokerage Jardine Lloyd Thompson Group.   Analysts blame “loss creep”: increased expenses from processing and settling claims – including ever-growing litigation costs, prompted in part by Assignment of Benefits (AOB) contracts between vendors and policyholders.  Estimated insured losses from Irma in Florida are $11.1 billion as of last November.

Losses from other 2017 hurricanes are also exceeding original estimates: Maria by 25% and Harvey by 17% according to COIN Re of Tampa.  Demotech reported this past week that it expects underwriting and operating losses from insurance companies covering those hurricane claims when they file their year-end 2018 financial statements.  That, in turn, will put upward pressure on homeowners insurance rates, especially in Florida.