While the Governor supports further litigation reform, data keeps mounting in support of tort reform, too, and the very real impact doing so would have on Florida’s economy.   I attended a news conference last week at the Capitol by business leaders, with legislators in attendance, sharing the very latest study on litigation abuse and its costs. 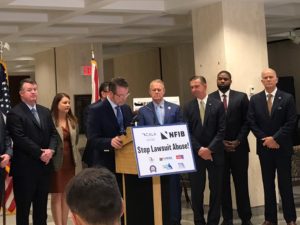 Citizens Against Lawsuit Abuse news conference at The Capitol, January 15, 2020.

The report notes that excess torts result in a “tort tax” of $719.01 per person.  The study analyzed outcomes in Florida using Ohio, which has engaged in notable tort reform in the recent past, as a benchmark.  Citizens Against Lawsuit Abuse, supported by the National Federation of Independent Business, the Hispanic Chamber, and other groups, are behind the effort at tort reform in the legislature this session.

Insurance Costs:  Efforts are underway once again this year in the Florida Legislature to point out the need to reduce the “hurricane tax” – the rapid cash build-up factor in the Florida Hurricane Catastrophe Fund.

The Fund provides reimbursements to insurers for a portion of their catastrophic hurricane losses.  Insurers pay premiums into the fund each year and pass the costs along to their policyholders, just like reinsurance.  But in quiet years, the fund has grown and can easily meet its current statutory requirement of $17 billion, prompting the question: Should you reduce collections and thereby reduce premiums to policyholders?

The Federal Association for Insurance Reform (FAIR) is out with a statement, Improving the Transparency of Florida Hurricane Catastrophe Fund’s (FHCF) Ratemaking.  It questions the Cat Fund’s ratemaking formula, which it says doesn’t adhere to actuarial standards because its underlying catastrophe model results are unidentified.  So there’s no way for peer review or other audit of the Fund’s Ratemaking Formula Report.

“The FHCF takes in nearly $100 million in premium a month from policyholders,” according to the FAIR statement. “Shouldn’t Floridians have the right to know exactly how the FHFC rate is calculated?”