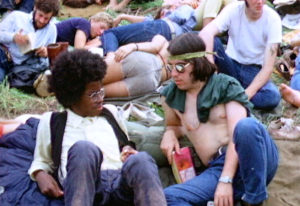 Woodstock 50 was scheduled for August 16–18 this year, to be held in Columbia, Maryland at Merriweather Post Pavilion.  The festival would have commemorated the 50th anniversary of the Woodstock Music & Art Fair, the famed festival that took place on August 15–17, 1969, in Bethel, New York.  Unfortunately, Woodstock 50 was canceled two weeks ago on July 31st after a myriad of production issues, venue changes, and artist withdrawals.

Many hoped this 50-year anniversary would have renewed the sentiments of the original Woodstock festival in ’69, a three-day period of time which has been described as paradise on Earth and even cosmic by some who were fortunate enough to attend.  Instead, it seems such a wild and fantastical event may never happen in the same way again.  Nevertheless, we can always look back and glean a bit of wisdom from that magnanimous human affair roughly 400,000 people in size.

John Fogerty – the lead singer, guitarist, and principal songwriter for the band Creedence Clearwater Revival – gave us an inspiring little story from his band’s personal experience performing at Woodstock ’69 in the recent PBS documentary Woodstock: Three Days That Defined a Generation:

“We were ready to rock out and we waited and waited and finally it was our turn … there were a half million people asleep… And this is the moment I will never forget as long as I live: A quarter mile away in the darkness, on the other edge of this bowl, there was some guy flicking his Bic [lighter], and in the night I hear, ‘Don’t worry about it, John. We’re with you.’  I played the rest of the show for that guy.”

It seems hard to believe that anyone would sleep through a Creedence Clearwater set at Woodstock as they are a personal favorite of mine.  Regardless, everyone needs support to achieve what they intend to achieve in their lives. This was Fogerty’s time to shine on stage with his band in front of 400,000 people, who happened to be resting from the sheer amount of energy they must have expended over the course of a few drug-fueled, psychedelic days.  Only a booing crowd of that size could be more demoralizing.  But that one guy with a lighter gave them reason enough to persist.

If we can learn anything from the events that transpired over those three days, we might as well try to be someone’s Bic lighter.  You never know who might need the inspiration.

Have a great week,
Lisa