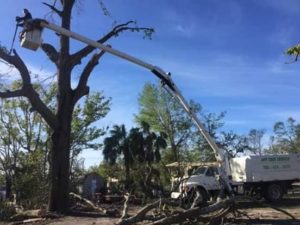 The start of another hurricane season is coming too soon for residents of Florida’s Panhandle, still reeling from the effects of last season’s devastating Hurricane Michael.  Much of the Cat 5 storm’s damage is still evident in the core six-county area and recovery has been slow, still lacking Congressional disaster relief.  Available housing remains scarce and Bay County is heading into hurricane season with only one available shelter.

Bay County schools took a big hit from Michael, suffering $250 million in uninsured losses.  Only one school is currently capable of serving as a shelter during a hurricane, which means once that fills up, folks would have to head north into Georgia and Alabama to seek formal shelters.

Housing remains one of the biggest problems, especially in Bay County, with more than half of the approximately 8,400 existing apartments still damaged and unlivable.  There are routinely no vacancies and apartment complexes estimate another four to six months before new or repaired units become available.  For a county that lost an initially 20,000 residents who simply moved away and haven’t yet returned, some have resorted to living in FEMA trailers where available –  others in tents in people’s backyards.  The county was the subject of a recent Atlanta Journal-Constitution article. 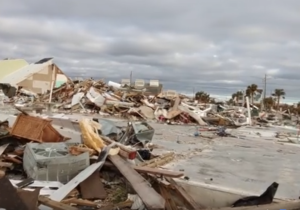 Congress is back in session this week and the House is expected to finally hold a formal roll call vote on a $19.1 billion national disaster relief bill approved by the Senate that includes $4.7 billion for the Panhandle.  It includes $2.4 billion in HUD-administered Community Development Block Grants, $1.67 billion to finish rebuilding Tyndall Air Force Base, $480 million for timber restoration, and $150 million for fishery losses.  Details of the bill are available here.

In the meantime, FEMA as of April 1, has provided $1.1 billion in federal relief funding, including loans and individual housing assistance to Panhandle residents.  Bay County officials last week asked FEMA to review about 60 properties that have been denied payments or possibly been underpaid for hurricane damage repairs.   Their request is based on comparing updated property assessments based on damage with FEMA payouts based on damage.  Bay County is expecting to take a 10% hit to property tax revenue due to Michael.  Governor DeSantis meanwhile has announced that the Florida Housing Finance Corporation is moving ahead with two new loan programs that will assist impacted counties and the victims who have been displaced by Michael.