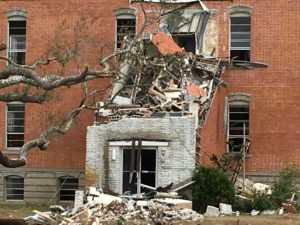 Damage to the Harrison Avenue School in Panama City, January 12, 2019

There is encouraging news to report on recovery efforts in Florida’s Panhandle from Hurricane Michael.  The federal government has agreed to pay 100% on interim debris removal, FEMA is pumping $2 million into recovery at ground zero in Mexico Beach, the Air Force is committing $3 billion to rebuild regional employer Tyndall Air Force Base bigger and better than ever, and Florida’s new agriculture commissioner says clearing the millions of downed trees will be job one because of the danger of spring wildfire and pine beetle infestation.

Michael created 20 million cubic tons of debris as it cut a 60-mile wide path from the Gulf of Mexico into Georgia.  Compare that to the 2 million cubic tons of debris created by Hurricane Irma.  Many local governments are overwhelmed and have run out of funds to continue the debris cleanup. Governor DeSantis last week announced that the federal government has agreed to pay 100% of the costs to remove storm debris for 45 days (instead of the usual 5 days) and 90% beyond that (up from 75%).

Blue tarps remain on many homes.  Trees still lay where they fell in some cases.  During our latest visit, household debris remains in piles in front of many homes.  It’s depressing and increasingly unhealthy as the heavy winter rains give way to warmer weather. 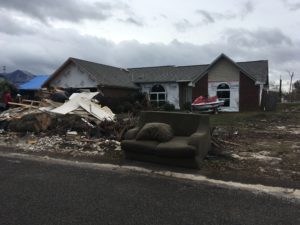 Bay County, the most populated and hardest hit of the 13 counties impacted by the storm, estimates debris removal in unincorporated areas will be $400 million; the county seat of Panama City is facing a $31 million bill to finish cleaning debris from its stormwater system.

FEMA last week announced its first award of $2 million in Stafford Act funding for debris removal in Mexico Beach, ground zero for the high-end Category 4 storm that struck with devastating 155 mph winds and 15 foot storm surge.  In all, 43 Floridians were killed as a result of the October 10 storm.

Estimated insured losses in Florida from Hurricane Michael now top $5.4 billion as of January 25, with 143,000 claims filed.  More than 74% of claims are closed and of those, 84% were paid.  But estimates of total property damage are expected to be much higher given a significant number of properties are uninsured in this mostly rural, sparsely-populated part of the state. 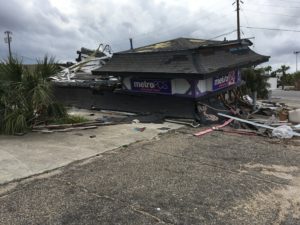 Debris removal aside, there is still great human need, with some residents trying to find longer-term temporary housing and money to pay for essentials.   Donations to the three major national charities to help Michael survivors is way down compared to prior disasters.  The Red Cross, Salvation Army, and United Way have received only half the monetary donations they took in for Hurricane Florence.  The lack of ongoing media attention and the rural nature of the region are considered factors.

Air Force officials last week toured the heavily damaged Tyndall Air Force Base between Panama City and Mexico Beach and announced a $3 billion spending package and blueprints for transforming the 80-year-old base into a state-of-the-art military facility. Reconstruction is expected to create between 4,000 and 5,000 jobs and be a major economic boost for the job-depressed region.

Piles of debris sit curbside outside each house in the Derby Woods subdivision in Lynn Haven, FL January 12, 2019

Agriculture Commissioner Nikki Fried was also in the region last week where timber losses alone have exceeded $1.3 billion.  She committed to working with the state legislature on an aid package that would include state-backed low-cost loans to help farmers with planting following extensive crop losses, a cost-sharing program to finance better irrigation systems, and sales tax exemptions for equipment and materials.

Meanwhile, Senate Appropriations Chairman Rob Bradley (R-Fleming Island) said he’s open to another idea: to use BP Oil Spill recovery money to help hurricane recovery in the Panhandle.  HB 191 would pull $100 million from the BP Oil Spill Deep Horizon fund for use by inland counties to build and replace damaged infrastructure (more next in Bill Watch).