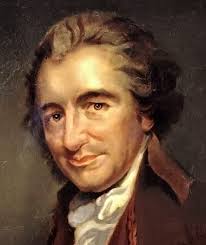 Thomas Paine: a philosopher, a mediocre soldier, and author of Common Sense, a pamphlet written in 1775–76 advocating independence from Great Britain to those people living in the thirteen colonies.  Though comparably a more radical member of the intellects behind the American Revolution, he nevertheless called for independence in his pamphlet long before others had, through his beautiful use of persuasive prose and enlightenment concepts of the rights of the ruled.

Paine’s words and their relevance to us may be long gone at this point in our history, but there’s always some utility in review of the fundamentals behind our patriotism.  He says simply that, “It is not in numbers, but in unity, that our great strength lies; yet our present numbers are sufficient to repel the force of all the world.”

And this, nonetheless, remains true today. What concern Paine’s words hold lay in our present political atmosphere.  The rise of the notion of “party over country” has become prevalent throughout the minds of many Americans and policymakers alike.  Paine knew our great strength was in our unity, not purely our great numbers; let alone great numbers of people divided in vision.

Despite our disagreements, the overarching theme must remind us that 1776 was not so long ago and it is not so farfetched to think that we may very well have to fight for independence and freedom once more. Let us, then, indulge our Common Sense.

Have a safe week,