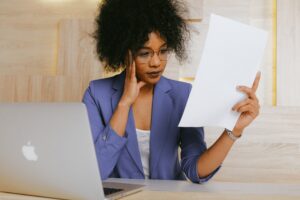 Photo by Anna Shvets from Pexels

A report from the U.S. Chamber of Commerce found that unfortunately women-owned businesses have been more heavily impacted by the pandemic than male-owned businesses and are less likely to anticipate a strong recovery in the year ahead.  It’s incredibly disheartening to think pre-pandemic women-owned businesses were increasing at such a drastic rate but now declining faster than their male counterparts.

Women’s History Month is a celebration of women’s contributions to history, culture and society, which originally began as a weeklong recognition in Sonoma, California in 1978.  In 1981, the U.S. Congress passed a resolution commemorating the week, with an official month-long acknowledgement in 1987.  Not a day goes by that I am not struck by listening to brilliant women solve complicated problems, sell unusual ideas, and share smiles in a time that needs more than usual.  Hats off to my female colleagues as we recognize them more than ever in March!