But OIR may not know the real story

The Florida Office of Insurance Regulation (OIR) has directed insurance companies to “redouble efforts” to resolve the 21,669 open claims that remain from Hurricane Michael, saying it will be issuing an “enhanced data call” on those open claims to determine why they haven’t been paid to date.  Noticeably absent from the directive is acknowledgment of the role Assignment of Benefits (AOB) and other litigation tactics have played in preventing the prompt settlement of those claims.

OIR Informational Memorandum OIR-19-04M, issued last Thursday, notes that insurers were supposed to be doing everything possible to respond to Floridians impacted by Michael, but noting that as of June 28, 21,669 claims remained open.  (The insurance company teams that I work with haven’t exactly been sitting around eating bon-bons and watching soap operas for the past nine months since the Cat-5 Michael struck!)

“More than 20,000 Floridians with open claims need assistance.  Insurers should redouble efforts to resolve all open claims, using whatever resources are necessary, to provide policyholders with the tools to rebuild their lives and property.  Policyholders have the right to expect prompt, efficient and fair claims adjustment service, especially after a catastrophic loss.  The Office demands nothing less,” states the memorandum, directed by Deputy Insurance Commissioner Susanne Murphy.

The memorandum follows a recent Tampa Bay Times article that noted the difficulties some homeowners are facing getting their claims paid or paid to their satisfaction.  Some have resorted to lawyers advertising on billboards.  My quote in the article: “I’m puzzled why lawyers who say they have their consumers’ best interest at heart encourage people to file a claim that 33 cents of every dollar goes in that lawyer’s pocket.” 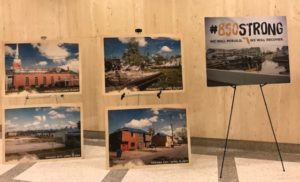 A collection of posters of Hurricane Michael damage on display outside plaza level executive offices at the Florida Capitol, June 2019.

What was glossed over in the article – and absent from OIR’s memorandum – is the fact that 85% of the 147,877 Michael claims have been closed (with 5 of 6 claims paid).  It’s the 16% that remain open that are getting the attention.  The frustration by those policyholders and OIR is certainly understandable, but let’s not ignore the white elephant in the room: AOB contracts and other litigation tactics that delay and deny fair, prompt settlement of claims.  There is a reason HB 7065 was just signed into law!

My advice in a return email to Ms. Murphy and DFS’ Fraud Bureau Chief Evangelina Brooks and Division Director Simon Blank, who I keep informed as I personally pursue bad contractors and public adjusters who have duped consumers, resulting in claims not settling: beef up that upcoming enhanced data call.   Be sure to include:

OIR should also seek to determine if settlement attempts have been collaborative with the claimant’s representatives, including written commentary received in the claim file reflecting the direction of a settlement or impasse.  For example, I’m working with a lawyer who shared that the opposing lawyer’s surplus lines client was not subject to fair claims handling practices laws!

I pledged to Ms. Murphy that I would work with her to ensure these bad actor shenanigans of delaying settlement become a part of OIR’s future data call report with the data to support it.  If you have any questions or comments regarding the memorandum, I am certain Deputy Commissioner Murphy would welcome your contact at Susanne.Murphy@floir.com or (850) 413-5083.  She is a balanced and brilliant regulator who will shoot straight with you.