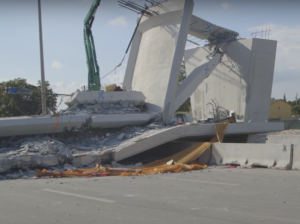 A federal report on last year’s collapse of a pedestrian bridge at Florida International University in Miami concludes that a design flaw, undiscovered because of improper review, coupled with a decision to keep the street underneath the bridge open on the day deeper cracks appeared, led to its fatal collapse.  Six people were killed, including one construction worker when the 930-ton span fell onto motorists on Southwest Eighth Street.  Another worker who weeks before noticed the first cracks was permanently disabled.

A Miami Herald article reveals a tragic catalogue of errors that occurred among a collection of stakeholders during bridge construction, based on a 115-page report by the Occupational Safety and Health Administration (OSHA).  They include the bridge’s engineering firm, the two engineering consulting firms that were supposed to double-check the design and construction, the bridge contractor, the University, and the Florida Department of Transportation, which oversaw the project but didn’t have direct involvement in design or construction.

Among the article’s findings based on the OSHA report: 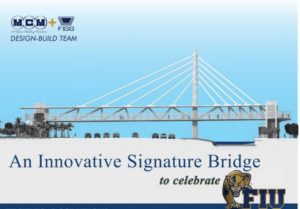 The cumulative errors were compounded on the morning of the bridge’s collapse, when during a conference call among parties to discuss the widening cracks, the decision was made to re-tension internal support cables in an effort to close the gaps.  OSHA concluded that was a fatal error, according to the article.

The newspaper noted the OSHA report is “the first time federal investigators have stated unequivocally that the roadway should have been closed in response to the cracking on the bridge.”  A report by the National Transportation Safety Board is due out later this year.

For our insurance and engineering/architectural clients and readers, the Miami-Herald article, available at the link above, is a must-read.  It’s very instructive on what can go wrong when risks are inadequately recognized and evaluated, and processes break down.