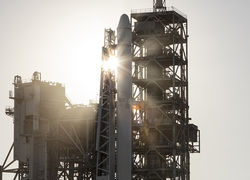 To kick this year off, I wrote about the man behind Tesla and SpaceX, Elon Musk, and his incredible work ethic, citing his “Work like Hell” quote to inspire us to find what drives us to effectively work harder than the competition.

Last week, Musk and the incredible team at SpaceX showed us just what that sort of drive can bring to our society.  The unmanned SpaceX Crew Dragon rocket successfully blasted-off from Cape Canaveral, docked with the International Space Station, then returned to earth with an old-school splash down in the Atlantic Ocean off Florida.  This mission’s flight was launched on March 2nd and lasted five days at the International Space Station.

This may very well be the inauguration of a brand new stage in spaceflight.  With its Shuttle Program concluded in 2011, NASA has been dependent on Russia’s Soyuz spacecraft to transport equipment and crews to the space station.  Now, through partnering with some in the private sector, like SpaceX and Boeing, they have an American alternative to deliver astronauts and supplies from Earth to the space station and back again.

The implications of this successful flight hold tantalizing and nostalgic prospects for our country.  We are beginning to witness the early phases of technology that will ultimately bring us closer to once unreachable destinations in our solar system.  There are plans to transport paid passengers to the station and to other reaches of space.  We are once again looking to the stars and further beyond for answers and I believe this is a sentiment that forges bonds among us as Americans, and in our larger Human collective.

Elon Musk himself passionately and positively commented on this achievement:

“I really believe in the future of space, and I think it’s important that we become a space-faring civilization and get out there among the stars… And I think that’s one of the things that, you know, makes people excited about the future.  We want the things that are in science fiction novels and movies not to be science fiction forever.  We want them to be real one day.”

And so we find ourselves amidst the same emotion and drive that brought us to the moon so many years ago; believing in the future of space.  A superordinate goal unlike that of all modern war, to reach towards the heavens and find our inspiration there once more.  To Elon Musk and SpaceX, please continue to work like hell.

Have a great work week,