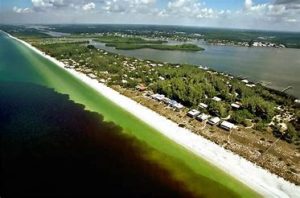 A study by the University of Florida published in the journal Science of the Total Environment shows that high amounts of nitrogen from fertilizer run-offs from farms and lawns, as well as septic tank leaching, has a clear impact on the intensity of the red tide.  The outbreaks or blooms, as they are often called, are caused by the rapid spread of the naturally occurring reddish-colored algae Karenia brevis.

“There has been this kind of uncertainty about whether there is this human link,” Christine Angelini, co-author and director of UF’s Center for Coastal Solutions, told the Miami Herald.  “For the first time, this paper really shows that.”

“We discovered that nitrogen-enriched Caloosahatchee River discharges have consistently intensified K. brevis blooms to varying degrees over time,” the study’s abstract notes.  “River discharge was typically most influential at the earliest stages of blooms, while total nitrogen concentrations exerted the strongest influence during blooms’ growth/maintenance stages.  These results indicate that discharges and nitrogen inputs influence blooms through distinct yet synergistic causal mechanisms.”

Red tide often causes fish kills and smelly beaches as a result.  It’s also known to cause respiratory inflammation in both healthy and vulnerable people, as well as watery eyes and itchy skin. Some who eat seafood contaminated with brevetoxins released by the algae, have had neurotoxic shellfish poisoning (NSP) with symptoms of nausea, vomiting, dizziness, and headaches.  But another new study, this one by The Roskamp Institute of Sarasota published in ScienceDirect, suggests airborne exposure to red tide could have similar neurological impacts to NSP, especially for those who have migraines or chronic fatigue syndrome.

The study involved 258 volunteers from Sarasota, Manatee, Lee, Charlotte, and Collier counties.  Researchers say they found a relationship between red tide blooms and reporting of respiratory as well as NSP-like symptoms – without any of the volunteers having eaten tainted seafood.  The study also indicated that repeated exposure to red tide could make healthy people more vulnerable to symptoms.

Our firm is following closely with our partners the subject of red tide as it ultimately effects the value of properties as well as now more potentially serious health effects.