The bill is only a start – more to be done 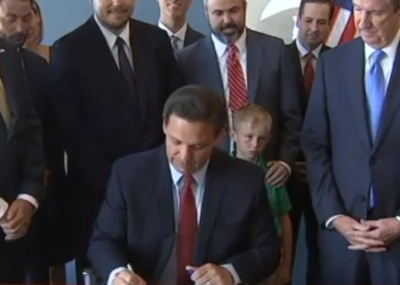 The big news of the week, of course, is Florida’s new property insurance reform signed into law, effective July 1.  SB 76  was signed by Governor DeSantis this past Friday in a Sarasota ceremony attended by legislators, regulators, and trade groups, that included a discussion of the law’s expected benefits.  While the bill signing included positive commentary with many attendees indicating the bill will be significantly impactful, our team is watching the online tutorials of those who specialize in taking advantage of all Floridians and driving higher rates, strategize on ways to work around the bill’s provisions.  The bill does not address the root cause of the roofing scams and we cannot rest until reforms are put in place, and enforced by regulators, to stop what are thousands of unscrupulous occurrences.

The bill has well intentioned language to address roof solicitation, claims, and litigation abuses in residential and commercial property insurance, but these new laws are only as good as those responsible for enforcing them.  We will be working closely with regulators to sort out the enforcement framework to be put in place.  (You can read its details in our final 2021 Bill Watch or in the summary Major Provisions of SB 76.  And keep an eye on your inbox today for an invitation to a no-cost webinar that LMA and a key defense firm partner will be conducting tomorrow, Tuesday June 15, from 10-11am.  Please email me directly at [email protected] if you would like to attend.)

Legislative leaders thanked the Governor for his “guidance, leadership, and help, without which we would not have gotten this across the finish line,” said bill sponsor Senator Jim Boyd (R-Bradenton), who noted the recent 20%-50% rate increases on homeowners policies driven largely by excessive litigation “and unscrupulous actors.”  Boyd referenced Insurance Commissioner David Altmaier’s April letter with the startling statistic that 8% of all U.S. property insurance claims originate in Florida yet 76% of all claims lawsuits nationwide are filed here. 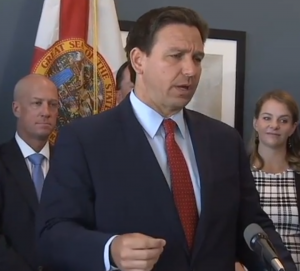 Governor DeSantis talks about expected impacts of SB-76 after signing the bill into law. Courtesy, The Florida Channel

During a meeting of Enterprise Florida earlier in the week, the Governor said “We want this to be affordable for homeowners.  We don’t want it to be something that is just kind of a pot for litigation.  And that really (is) what was happening in Florida.  I mean a huge, huge proportion of the money was going to litigation expenses.”  Senator Boyd noted that once the backlog of insurance litigation makes its ways through the courts, “we should be seeing rates stabilize.”  The Governor said “it’s something we’re watching closely…but we’re probably going to have to do more going forward.”  Sarasota Realtor Darla Furst added that “Litigation is a huge concern.”

Commissioner Altmaier told the Governor that he’s seen improvements in the market already since the bill’s passage.  “Carriers have brought in additional private market capital to re-bolster their balance sheets, we’ve seen positive news from the reinsurance markets with respect to the direction of reinsurance rates, and we’re seeing private carriers pick up additional policies around the state to re-optimize their portfolios as we head into a very critical hurricane season,” Altmaier said.

As Barry Gilway, President and CEO of Citizens Property Insurance has said many times, we must stop the flight of private market policies (133,000 in the past 12 months) to the state-backed Citizens, which is “growing at an unsustainable rate,” he said.  Those who are in the field every day on the front lines will tell anyone who will listen we have much more to achieve!

The other big insurance bill this legislative session – SB 54 – which would do away with Personal Injury Protection (PIP) coverage under Florida’s No-Fault automobile insurance law, has not been presented to the Governor for his consideration.