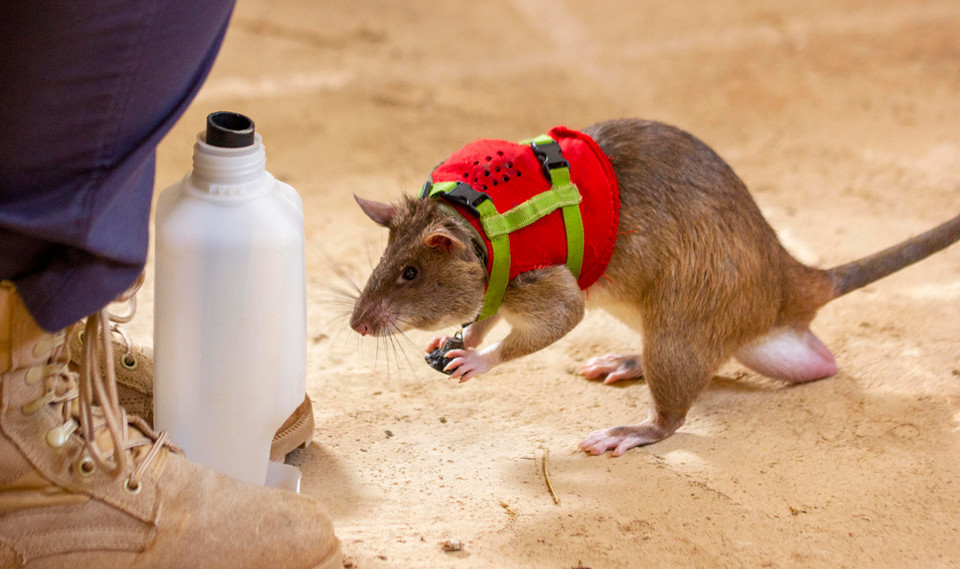 A giant pouched rat pulls a small ball on its vest, alerting researchers that it has located a mock victim. Courtesy, APOPO

Donna Kean and her associates at APOPO, a nonprofit that trains pouched rats to be rescuers, have worked diligently over the past two decades training these curious animals (Cricetomys ansorgei) to sniff out tuberculosis as well as hidden land mines.  Now, they’re preparing for their new project, known as RescueRats.  The rats were selected for their comparable sense of smell to dogs, as well as their trainability.  They’re also not likely to become attached to just one trainer, unlike dogs.  And of course, their very small size is extremely beneficial to their mission, being able to penetrate into dense rubble and debris that dogs aren’t capable of.

Kean elaborated on the training process for their rats in an interview with the journal Science:

“The first thing we did was train them to return to their starting point.  A trainer released the rat in an empty room and let it wander around.  We trained the rat to come back to the starting point when we played a beep; they were fed a reward of powdered rat pellets mixed with avocado and banana through a syringe when they did so.  Then we trained the rats to pull a rubber ball on their backpack.  The ball is attached to a microswitch, which emits a beep.  In the real world, it would provide a signal to rescuers.  When they were reliably doing that, we’d start introducing a target human.  The goal is for the rat to go over to this mock victim, pull the ball, return to where they were released from when they hear the beep.”

The RescueRats began their training back in August 2021 and are still on their way to becoming professionals.  Of the nine rats at the top of their program, all have mastered the first two training programs and six have consistently completed the entire training sequence.

In Tanzania, the African giant pouched rats are endemic and APOPO has had an established land mine detection program with them for 20 years.  Kean and APOPO have advocated that although these furry, four-legged friends aren’t the ones we know and love in our homes, they really can be heroes – not pests.  In the unfortunate event that we here in Florida experience another catastrophe, we hope to have the RescueRats on our front lines.

See you on the road,
Lisa