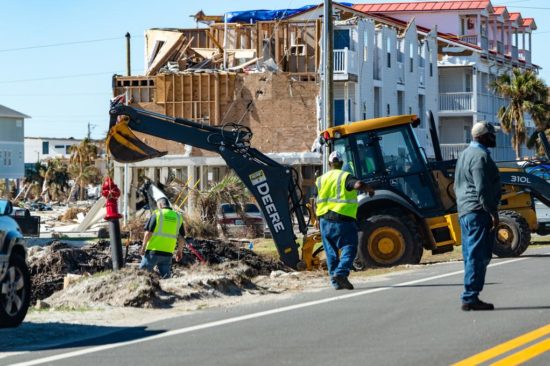 The latest claims numbers from Hurricane Michael will be released here later today by the Florida Office of Insurance Regulation (OIR) as the counting also continues to find the exact number of destroyed buildings in Bay County, ground zero for the storm’s 155 mph winds.  Even measurements of wind speeds are still being analyzed to determine if this might instead have been a true Cat 5 storm (157+ mph sustained winds) when it hit Mexico Beach.

I was in the panhandle again as recently as this past Tuesday.  While power was fully restored on November 7, the debris is everywhere and it serves as a constant reminder of this storm.  I know some of you have volunteered to come north and chop trees and the like.  If you are interested in participating in a volunteer effort, please let me know and I can connect you.

OIR’s latest figures from a week ago Friday was nearly 120,000 claims with a total estimated insured loss of just under $3 billion. 46% of claims have been closed with 80% of those paid.  Compare this to 2017’s Hurricane Irma, with its now one million claims filed and insured losses at $11.08 billion.  That represents a $600 million increases in losses in the past three months of insurance company reporting, per OIR, with loss to the U.S. economy expected to be more than $15 billion.

Citizens Property Insurance Corporation, with more than half of its panhandle policies being mobile homes, is seeing relatively light claims and loss numbers.  As of this past Wednesday, the state’s insurer of last resort had 3,189 claims with an average payout of $28,000 and at this point, estimates that it will have about $142 million in paid losses and expenses combined.  This chart breaks down those claims further. 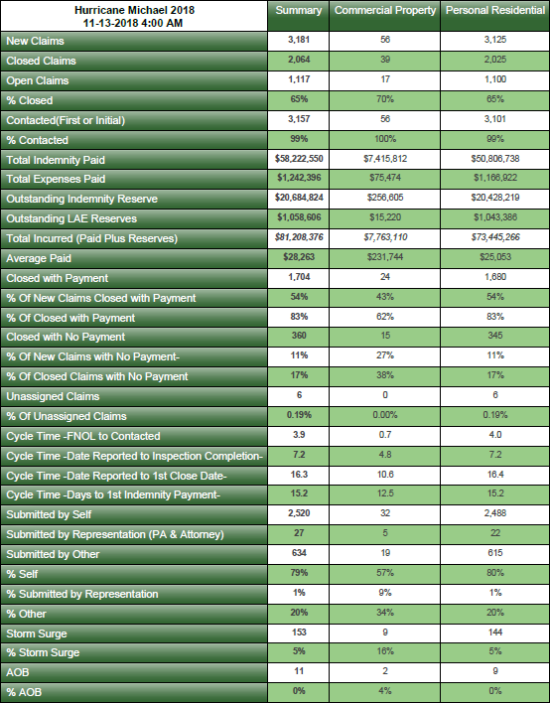 While there’s no firm count yet of the number of Bay County structures destroyed in Hurricane Michael, the property appraiser has removed about 1,600 properties so far from the tax rolls.  I can report, too, that the Red Cross has completed almost 50,000 individual property damage assessments and are willing to share that data with anyone. If you are interested in securing that data, please contact me.

Rebuilding in the panhandle is just really getting underway as the first insurance checks arrive.  There are shortages of construction materials (shingles for example are on back order) and contractors report they are driving as far away as Central Florida to find supplies.  There’s not enough workers either.  The rebuilding effort will worsen because of a skilled worker shortage that “continues to be a massive problem for the industry,” to quote one trade association representative.  I received a call from Calhoun County and finding roofers (honest ones) has been a challenge. We are working on this need.

Most of the panhandle is rural – a relatively sparse population (thankfully) but heavy in agricultural interests.  New reports put agriculture losses at almost $1.5 billion, with economic losses for the large timber industry there estimated at $1.3 billion of that figure.  The losses extend into Georgia, where the hurricane entered the state as a Cat 3 storm with 115 mph sustained winds.  Insured losses are now $670 million with about 68,000 claims filed as of the end of October.  Damage to Georgia’s cotton crop alone are estimated at $550 to $600 million. 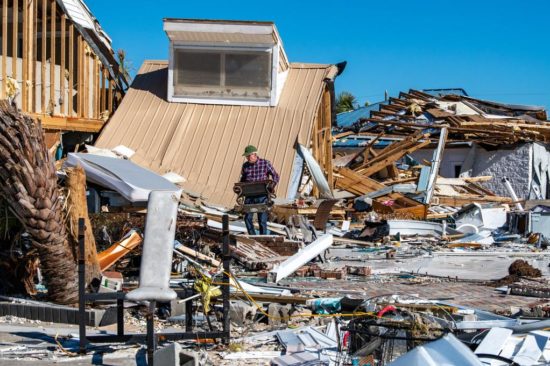 NOAA is still examining data to see if Hurricane Michael is officially a Cat 4 or Cat 5 storm.  But that 2 mph seems a distinction without a difference at this point.  Scientists say the hurricane’s eyewall had winds in excess of 200 mph, equivalent to an EF3 tornado and strong enough to destroy homes and fling cars through the air.  The U.S. Geological Survey has concluded storm surge at landfall of Mexico Beach reached 15.55 feet, about a half-foot higher than previously reported.  That doesn’t include the 5-foot waves on top of the surge.

And for those of you hearing the increasingly common complaint that we keep having all of these 100-year storms in a matter of the past 5 or 6 years, is this timely reminder courtesy of the Palm Beach Post of just how that term is defined. (Spoiler alert: it’s simply a 1% chance in any given location in any given year of a 100-year rainfall amount.)  It’s an understandable and scientific explanation you may find useful in your work – and why having flood insurance is so important!