There’s been some fuss since summer about the number of open insurance claims from Hurricane Michael, which struck the Florida Panhandle a year ago October 10.  So regulators ordered an enhanced data call of insurance companies’ claims to gain some insight.  The resulting report is out and served as a catalyst for debate this past week over whether there is a particular issue or not – and how best to get repair money into the hands of policyholders even more quickly.

The report also compares claims with those in 2017’s Hurricane Irma.  While Irma affected a much larger area of the state, Hurricane Michael has proven to be a costlier storm, with the average payout four times greater than the average Irma claim.  While the percentage of open claims is currently higher than in Irma (11.6% vs. 7.6%), there is a 2-month difference in history in the OIR report.  Cat-5 storms such as Michael create more damage, adding to complexity in claims processing.  This is something that regulators know – and elected officials often don’t.  It’s also noteworthy that 3 of every 4 closed claims has resulted favorably in payment.

Insurance Commissioner David Altmaier faced two state legislative insurance committees last week to answer questions.  He noted that of the open Michael claims, more than half were re-opened claims (which is typical as more damage or greater estimated costs are discovered during repair), more than one-third were in litigation, and one-third involved an Assignment of Benefits (AOB) contract, as noted in the below chart. 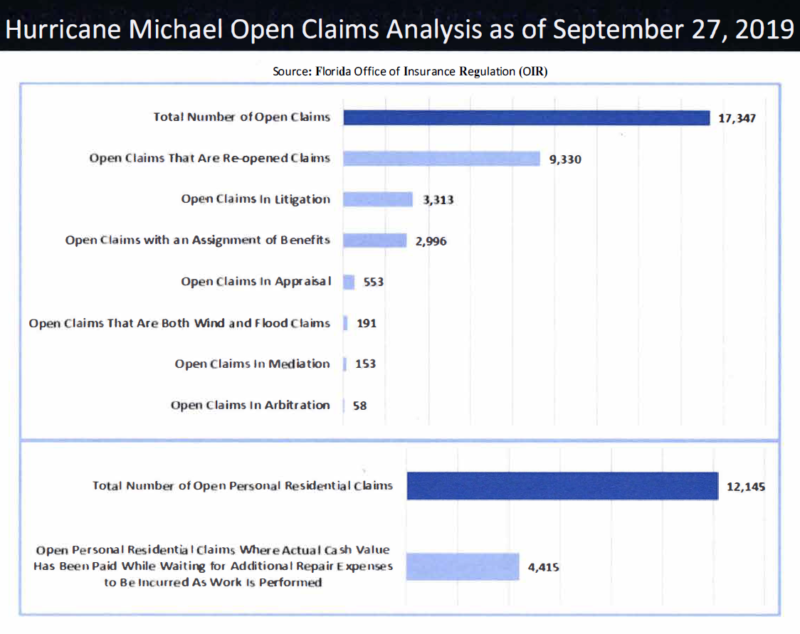 Commissioner Altmaier said OIR has been constantly monitoring claims activity and has investigated several companies but found no violations.  Also testifying was the Department of Financial Services Consumer Affairs Division, which noted an extraordinarily low number of post-storm complaints to its hotline.  Newly appointed Insurance Consumer Advocate Tasha Carter testified that she’s not able to draw any substantive conclusions, but has begun a survey seeking details on 75% of those open claims.

Senate Banking and Insurance Committee chairman Doug Broxson (R-Pensacola) asked both Carter and Altmaier to conduct studies to get to the root of the issue, and to break down the data among domestic, national, and surplus lines carriers.  Altmaier said OIR has initiated targeted market conduct examinations on seven insurance companies, but warned some issues may fall short of OIR’s statutory power to correct.  He has also sent a second “enhanced data call” to companies, including numbers of claims represented by both a public adjuster and a lawyer.

Senator Broxson asked Commissioner Altmaier to look at new dynamics at work.  Domestic insurance companies, he noted, have independent adjusters whereas national carriers have in-house fleets of adjusters.  The Senator asked for a fresh look at “trying to settle a claim quickly…we need to work with frustrated consumers,” he said.