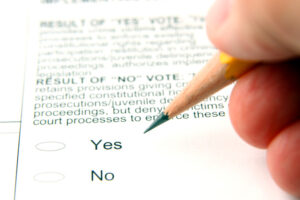 (Editor’s note: This is the second of a three-part series on the six proposed state constitutional amendments that will appear on the November 3 ballot for Florida voters to consider. View part one.)

Amendment 3 is titled “All Voters Vote in Primary Elections for State Legislature, Governor, and Cabinet.”  It allows all registered voters, regardless of political party affiliation or lack of affiliation, to vote in primaries for state legislature, governor, and cabinet.  All candidates for an office, including party nominated candidates, appear on the same primary ballot, for everyone to see and vote on.  The two highest vote getters would advance to the general election.  If only two candidates in a race qualify, no primary is held and the winner is determined in the general election.  A candidate’s party affiliation may appear on ballot as provided by law.

Amendment 3 is a citizen initiative, proposed by a political action committee called All Voters Vote, Inc. out of Tallahassee.  The group argues that non-party affiliated voters in Florida, which today number greater than Republican Party or Democratic Party voters, aren’t currently allowed to vote in meaningful primary elections because they don’t belong to a party.   Amendment opponents say it would dilute minority voting strength and could result in two candidates of the same party facing off in the general election.

The state’s Financial Impact Estimating Conference review of this amendment notes that it is probable that the proposed amendment will result in additional local government costs to conduct elections in Florida, with combined costs across counties ranging from $5.2 million to $5.8 million for each of the first three election cycles.  You can read more here.

Amendment 4 is titled “Voter Approval of Constitutional Amendments” and would require all proposed amendments or revisions to the state constitution be approved by the voters in two elections, instead of one, in order to take effect. The proposal applies the current thresholds of 60% for passage to each of the two elections.

Amendment 4 is a citizen initiative, proposed by a political action committee called Keep Our Constitution Clean PC, out of Fort Lauderdale.   The group argues the amendment is needed because it’s still too easy to amend the state constitution.  Opponents say it will put a damper on citizen initiatives by driving up costs.

The state’s Financial Impact Estimating Conference review of this amendment notes it is probable that it will result in additional state and local government costs to conduct elections in Florida.   You can read more here.

All proposed amendments to Florida’s constitution require a 60% majority vote to be approved.  As many of our readers are Floridians, it’s important to know how each of these measures can affect us and our families, businesses, and employees.  Knowledge is power!  Election Day is Tuesday, November 3.  Please be sure to exercise your civic duty to vote!