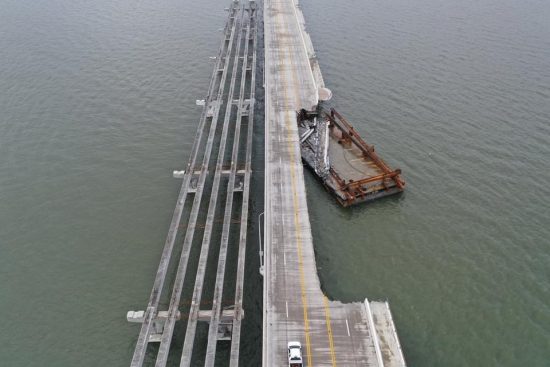 One of the most startling images from 2020 was the damage created by several runaway barges in Pensacola Bay during the height of Hurricane Sally.  The barges damaged the under construction Pensacola Bay Bridge, along with other coastal infrastructure, creating a months-long traffic detour from the barrier islands.  Now a federal court has ruled against the barges’ owner, Skanska, in its request seeking exoneration or limited liability from the resulting damage.

Skanska was operating a fleet of 55 barges it used in construction of the new southbound span of the Pensacola Bay Bridge.  Several of the 27 barges that tore loose from their moorings repeatedly collided with the bridge, tearing off chunks of the roadway. There were other barges which made various landfalls on the Pensacola side of the bay.  One barge wiped out the 18th hole of a local country club on Pensacola Bay.  Another barge came perilously close to striking the Interstate 10 bridge over Escambia Bay, a previous victim of Hurricane Ivan, 16 years ago to the day.

The District Court found that Skanska was negligent and not entitled to exoneration, noting “that negligence sprung wholly from executive decision-making that resulted in failure to take reasonable measures to protect its barges from the impending storm.”  Although the company had a hurricane plan in place, the court found it failed to move the barges to safe harbor in accordance with that plan.  Its Limitation Action was dismissed and the company and its insurance companies now face litigation from a host of claimants who suffered damages.

Hurricane Sally made landfall just 30 miles west of Pensacola at Gulf Shores, Alabama as a Category 2 hurricane on September 16, 2020, with deluging rain and 105 mph winds.  More than 2 feet of rain was recorded at Naval Station Pensacola, with one spot recording 30 inches.  Total damages were estimated at $7.3 billion across the southeastern U.S., Cuba, and Bahamas, with most damage occurring in Alabama and Florida.  Here are more pictures and video of the storm’s damage we provided at the time from our access to exclusive drone footage.