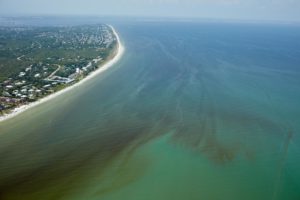 Florida officials are busy this summer studying the ongoing double algae threat to the Sunshine State: the red algae producing “Red Tide” that hit Gulf and Atlantic beaches hard last year, and the blue-green algae that is once again choking inner waterways.  The latter has produced algae blooms this summer that scientists say are too toxic to touch, sparking health concerns, even as two state task forces begin their work toward finding solutions.

The annual Red Tide lasted a record 15 months through this past January and resulted in the deaths of tons of fish, sea turtles, and other aquatic wildlife that washed up on Gulf and Atlantic coast beaches.  The reddish-brown water also caused respiratory problems in vulnerable people and hurt tourism.  Governor DeSantis signed a bill in late June that provides $3 million annually for the next 6 years toward a public-private research partnership with the Mote Marine Laboratory in Sarasota. The task: find ways to better detect and alleviate the naturally-occurring red tide blooms, while keeping the public better informed. 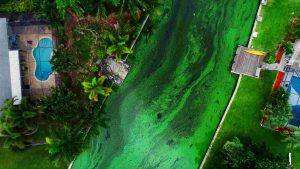 The inland rivers, canals and estuaries that lead to those Gulf and South Florida Atlantic beaches have faced a different issue over the past few years: blue-green algae.  This is a naturally-occurring bacteria fed by sunlight that when super fueled by pollution from nutrients – excess fertilizer and leaking septic tanks – can produce bright green algae blooms.  The blooms can produce toxins that can cause skin rashes and aggravate respiratory problems.

New tests around Lake Okeechobee, the source of blue-green algae blooms in waterways on both sides of the Lake leading to the east and west coasts, revealed levels of toxins three to seven times too toxic to touch.  The new state budget contains $4 million to expanding statewide water quality analytics. 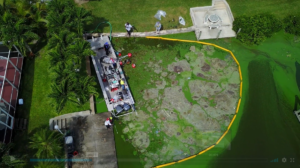 The state’s new Blue-Green Algae Task Force is trying to figure out how to prevent future blooms.  It’s determined so far that voluntary “Best Management Practices” to stem pollution aren’t working as well as they could be.  Although required by law, only 75% of agribusiness has adopted the practices to reduce their nutrient runoff.  The state Department of Environmental Protection is considering new regulations to quantify allowable levels in the state’s waterways.

The Task Force is also looking for new ideas from the public on how to prevent, fight, or cleanup the blooms for consideration at its next meeting on August 1.  We’ve chronicled AECOM’s successful cleanup efforts last fall in Ft. Myers.  Meanwhile, a team at Florida Gulf Coast University is exploring the use of a virus called phage, which eats bacteria, in the hope it may help.

As if all of this weren’t enough, also at play is a growing stretch of slimy seaweed, called sargassum, which has been washing up in greater quantities over the past five years on some South Florida and Gulf Coast beaches.  The seaweed turns clear seawater brown and can smell like rotten eggs, but is otherwise not a public health concern.

The red algae’s Red Tide and the blue-green algae blooms, while different, are the most menacing threat to our most important resource: water!