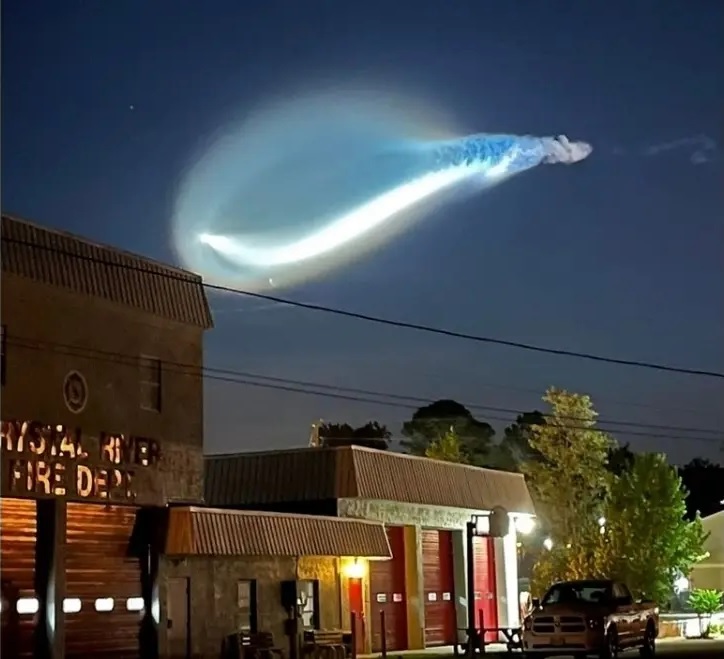 A space jellyfish in the skies over Citrus County, Florida, May 6, 2022. Courtesy, Citrus County Sheriff’s Office

Due to our lifelong fascination with all boundary-breaking innovation done here in Florida (it seems to have become a trend), we are back to share yet another SpaceX story.  This time: Space Jellyfish. Unfortunately, Elon Musk has not actually come down on any one of his rockets to announce the discovery of life in outer space.

Instead, those Floridians watching the sky at 5:42 a.m. this past Friday were treated to a SpaceX Falcon 9 rocket launch that put on an incredible light show.  Out of the Kennedy Space Center in Cape Canaveral, this launch mission carried 53 Starlink satellites into low-Earth orbit, exhibiting a rare and special feature known as the space jellyfish phenomena.  Unsurprisingly, the event has prompted a myriad of false UFO sightings in the past.  Friday’s light effect occurs when an early morning or evening twilight rocket launch creates a plume of gas which reflects sunlight in a spectacular optical display.

In the midst of all the fanfare, the NASA-SpaceX team also managed a successful return of the Crew-3 astronauts in the SpaceX Dragon rocket dubbed “Endurance”, splashing down off the east coast of Florida earlier that morning at 12:43 a.m.  After a six-month stay at the International Space Station, the Crew-3 astronauts said they were glad to be back on Earth and out of the artificial gravity environment they once called home.

Over the course of their mission, the Crew-3 astronauts conducted a host of science, maintenance, and technology operations.  They also participated in a total of three spacewalks to carry out those maintenance duties.  Crew-3 continued prior investigations into the nature of fiber growth in microgravity, collecting images of their own retinas in order to automatically detect the eye fluctuations of astronauts in future space missions, as well as performing tests with technology that capture the measurements of certain biological indicators linked to disease or infection – and that may very well be the least of their hard work.

We remain in awe of the good that humanity continues to do in the face of new and growing challenges. SpaceX and NASA are the progress we love to see and hope them many successes in the future. With up to 40 more launches expected by year’s end, stay tuned for our next installment of Florida’s totally amazing and awesome discoveries.