November 8, PM Update – Our November surprise has arrived and we want you, our friends and colleagues, to please prepare and be aware!  Tropical Storm Nicole has intensified and is expected to become a hurricane tomorrow (Wednesday) as it nears the northwestern Bahamas and makes landfall somewhere along Florida’s east coast tomorrow night into Thursday morning.  It will impact many areas of Florida that were impacted by Hurricane Ian on September 28.  Although the National Hurricane Center has shifted its hurricane warnings further north up the coast since yesterday – and no longer includes Miami and Ft. Lauderdale – Ian taught us that “data changes” can create unpleasant surprises.  The other thing to keep in mind is that damaging tropical-storm-force winds (39-73 mph) extend outward up to 380 miles from the center.  By comparison, the Florida peninsula is a maximum 140 miles wide as the crow flies east-to-west.  So everyone in Florida at this point, from Tallahassee east and south, is going to feel – and should be prepared for – some effects from Nicole well before it even makes landfall, including Florida’s Gulf Coast.

As of 4pm today, Nicole’s maximum sustained winds were near 65 mph with higher guests.  It’s located 395 miles east of West Palm Beach and is moving to the west at 10 mph.  The National Hurricane Center isn’t predicting its wind strength at landfall, but Nicole is forecast to bring rainfall amounts of 3-5 inches with some areas seeing a maximum of 8 inches.  Storm surge is predicted to be 3-5 feet along the coast and 2-4 feet on inland waters, including areas along the St. Johns River in Central and Northeast Florida that saw inundation from Hurricane Ian.  It is expected to move into South Georgia by Thursday night.

As you look at the map directly below of Nicole’s forecast path, remember not to put any reliance on where the center of the storm is expected, as technically the center can occur anywhere on or within the outline of the cone shown.  Nor does it represent the size of the storm.  Also, as we know, the Northeast quadrant to a storm’s eye usually has the strongest, most damaging winds and this storm currently has a huge wind field of 380 miles.  We saw this with Hurricane Ian in September and with other past storms.  Also, about a third of the time, the storm travels outside the cone. 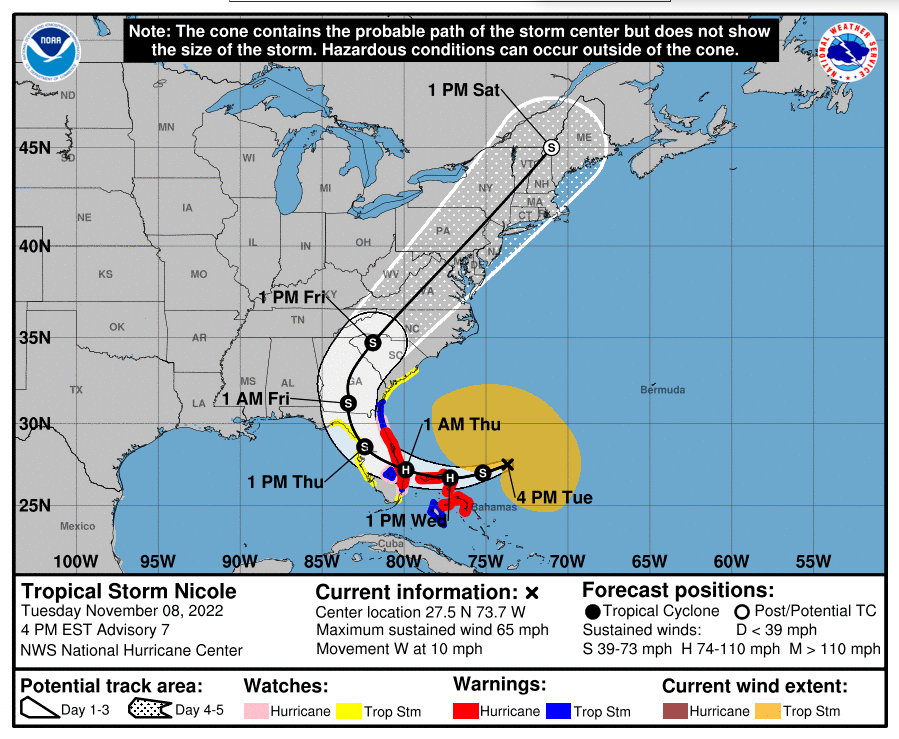 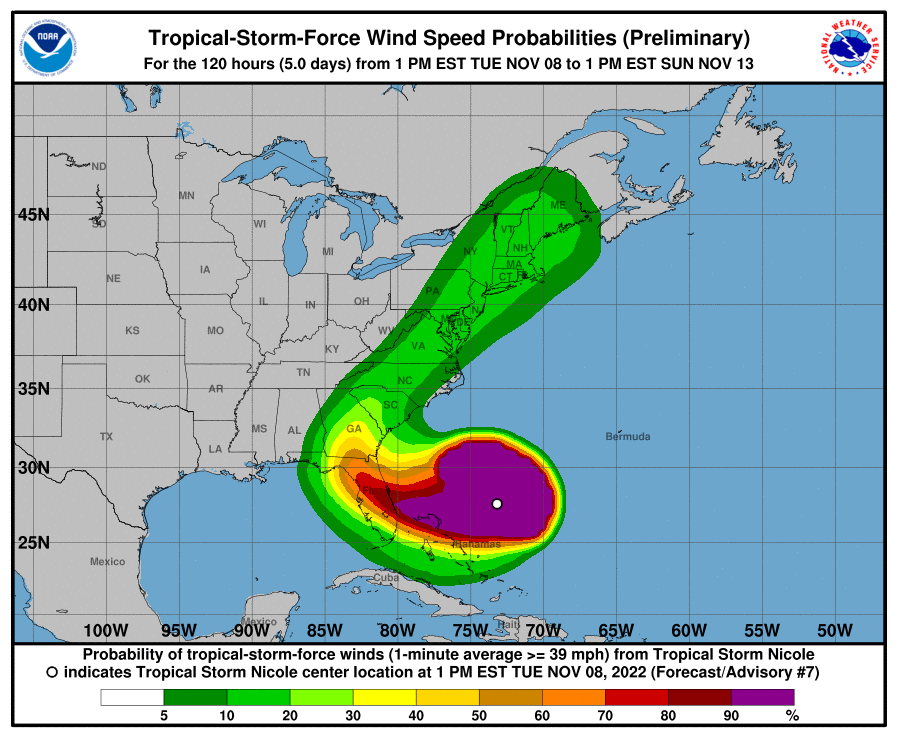 Governor DeSantis issued an executive order Monday declaring a state of emergency in 34 counties.  The state Division of Emergency Management is coordinating the prepositioning of resources with those counties along the coast and immediately inland that are expected to be most impacted.

Palm Beach County officials this afternoon announced mandatory evacuations for tomorrow morning at 7am for Zones A and B, which includes mobile homes, barrier islands and low lying areas.  Shelters at six schools will be open tomorrow at 7 a.m.

Counties further north along the coast, including Martin, St. Lucie, Indian River, and Brevard have issued voluntary evacuations for their barrier islands and similar low lying and flood-prone areas and will open their shelters tomorrow morning as well.

There is special concern for areas inland of the coast which saw a lot of rainfall from Hurricane Ian or otherwise suffered flooding from the St. Johns River and its many tributaries.  One of those is Seminole County, north of Orlando.  At a news conference today, Seminole County emergency management chief Alan Harris said, “The water on the ground has saturated the root structures of many trees.  The winds could bring down trees and those could bring down power lines.”

Current Warnings/Watches as of 4pm today: 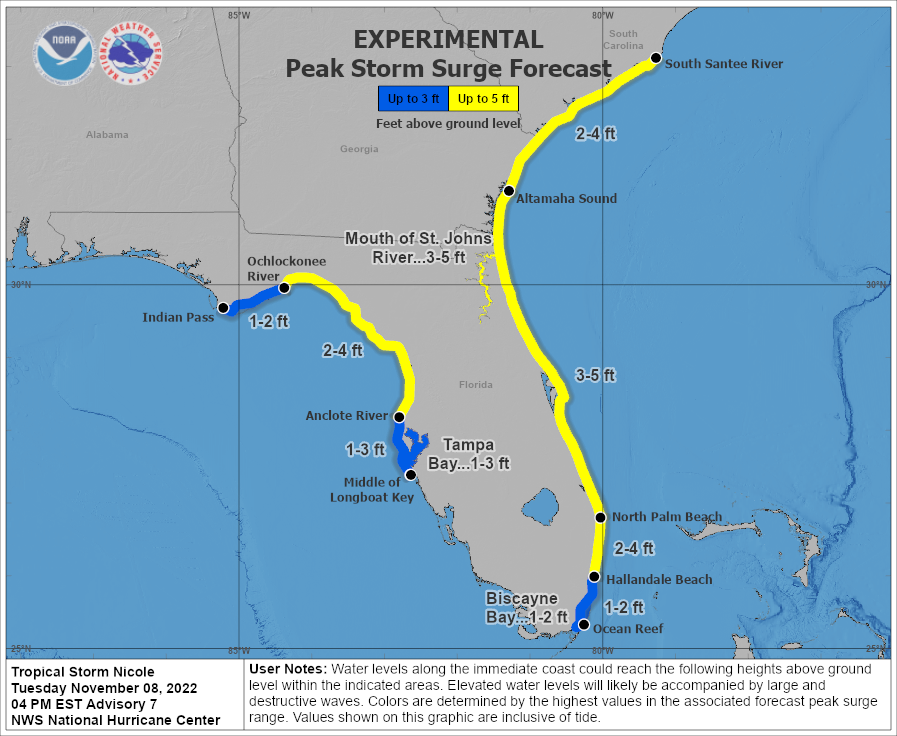 Nicole will become only the third hurricane to make a November landfall in Florida.  The other two were the Yankee Hurricane of 1935 and Hurricane Kate, which made landfall in 1985 as a Category 2 storm.  The Atlantic Hurricane Season officially runs through November 30.

Click here for the full National Hurricane Center briefing with maps.   You can also review our past Hurricane Updates.

Please know that we at Lisa Miller & Associates are here 24/7 for you …don’t forget it.  It may sound trite but we are all in this together, my friends and colleagues.  Please prepare and be aware!