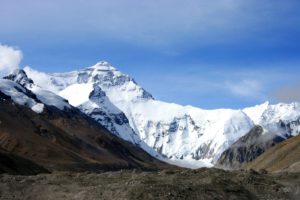 Last week on May 29, marked the 66th anniversary of Sir Edmund Hillary and Tenzing Norgay becoming the first pioneers to successfully summit Mount Everest, the highest point on earth.  At 29,035 feet above sea level, Mount Everest stands on the crest of the Great Himalayas in Asia, resting on the border dividing Nepal and Tibet.  The anniversary of this mountaineering achievement however, was overshadowed this past week by multiple tragedies that hold a lesson for us.

Everest is one of our planet’s seven tallest continental summits and remains one of the most rigorous climbing expeditions in the world for good reason.  Since records have been kept, 4,833 people have summited Everest a total of 8,306 times since Hillary and Tenzing’s 1953 success. In that same time, 288 people have died attempting Everest on all routes.  The mountain has become more crowded and more expensive over the years, with an average of six to eight deaths annually.

This 2019 climbing season, however, has been unusually dangerous due to overcrowding near the so-called “death zone”— the area between the highest camp and the peak, where oxygen is low and supplies are light.  As of last Monday, 11 people have already lost their lives in the space of ten days attempting Everest’s summit.  One mountaineer described the overcrowded scene at the summit as a “zoo” of unfit and inexperienced climbers “basically pushing so they could get better pictures of themselves.”  What an unfortunate turn of events on the anniversary week of Hillary and Norgay’s achievement.

While we may remain in awe of the natural wonder of Mount Everest and the extent of great human accomplishment in achieving its summit, it is disheartening to discard the reverence of the surroundings and see Everest’s distinguished history undermined by individuals scrapping amongst each other for the perfect selfie.  While the pursuit of individual glory does not necessarily imply selfishness, the general lack of respect for things grander than ourselves and, moreover, the absence of concern for those pursuing their own glory alongside us are not conducive to the greater good.  Our personal experiences will almost certainly defer from one another but with regard to our shared human adventure, there is no gain to be made in arrogance.

Climbing Everest will remain a dangerous yet respectable feat and the risk of death always present, but peril at the hands of our own hubris can be curbed for the sake of all who wish to experience the mountain for themselves.  The takeaway, I suppose, would suggest that whether we are climbing the Earth’s tallest mountain or actively pursuing our respective successes in life, triumph at the expense of others is no triumph at all.