In what may be one of the most fanciful mitigation ideas to date in South Florida, the U.S. Army Corps of Engineers is out with a proposal to build a 10-13 foot tall wall along the coast in parts of Miami-Dade County, in an effort to block storm surge from future hurricanes.  According to the Miami Herald, which recently broke the story, the fed’s project would include moveable storm surge gates at the entrances to Miami’s rivers and inland drainage canals.

Because they do it in parts of Europe, the Corps says it considers “storm surge barriers” a viable option here in Florida, and one of seven ideas they presented to the public at workshops last summer, as part of their coastal storm risk management program.  It would involve about 12 miles of wall and might require seizing more than 350 properties through eminent domain.  Estimated cost: $8 billion, but likely to grow, with the Feds picking up 65% of the cost.

Gigantic swing gates would be installed at the mouths of the Miami River, Little River, and Biscayne Canal and would remain open, except in pending storms.  The proposal also includes elevating 10,000 homes and floodproofing 7,000 buildings, according to the Herald article. 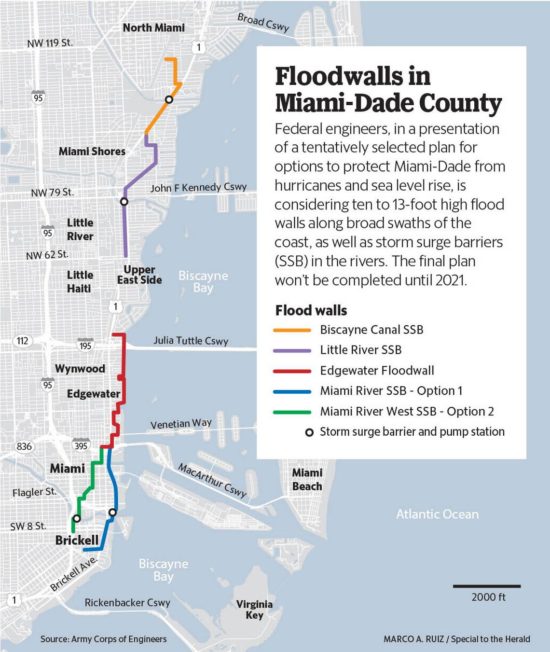 Courtesy Marco Ruiz/Army Corps of Engineers, via The Miami Herald

The risk management program is based on the Corps’ assuming South Florida will see more than three feet of sea level rise between now and the year 2080.  The flood walls however, would be ineffective against current or any future sea level rise by itself, given the porous rock underneath Miami allows water to seep up.  As we reported in last week’s newsletter, Miami Beach is considering whether to continue its plans to elevate roadways to deal with occasional flooding.

The formal release of the flood wall proposal will occur by this summer for public comment and a final decision isn’t expected until mid-2021.  The article quotes Corps officials as saying much more research would need to be done, along with community input, to determine an exact location through existing neighborhoods for the wall. The Herald reports the Corps is also working on a similar study in the Florida Keys.