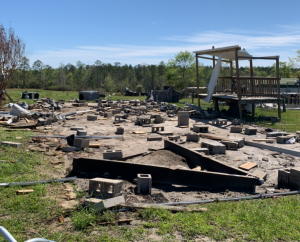 If this month’s weather events in Florida so far are any indication, then we’re in for a tough season of catastrophes here this spring and summer.  A deadly tornado that eventually grew to EF-3 strength (136-165 mph) hit the Florida Panhandle on March 31, killing two people inside a double-wide manufactured home in the town of Alford, just south of I-10, 45 miles north of Panama City.  The anchored double-wide was completely destroyed, its contents found 100 yards away in the woods. One person in a nearby single-wide home was injured when he was thrown into the tree line grasping his mattress.  At least three other people were injured as the storm moved from Washington County into Jackson County. 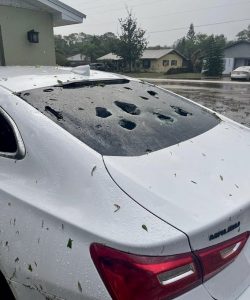 Then this past Monday, a rare hailstorm hit parts of South Florida, from the central interior east to Miami. Large hail, some 2-inches in diameter (the size of a small lime) caused significant damage in the town of Avon Park in Highlands County, northwest of Lake Okeechobee.  There was major damage to cars and to homes, with resulting insurance claims, but thankfully no injuries.  AccuWeather reports there have been just two other instances of hail as large or larger than this in Florida in the last five years.  The Florida Department of Financial Services (DFS) sent one of its Anti-Fraud Strike Teams to the area to educate residents about repair and insurance fraud and make sure contractors weren’t breaking any laws when conducting repairs.  DFS says it did so after receiving reports of possible unnecessary roof repairs.  Then this past Wednesday, a short-lived but high-end EF-0 tornado with 85 mph winds hit Palm Beach Gardens, damaging the Burns Road Community Center.  No one was injured. 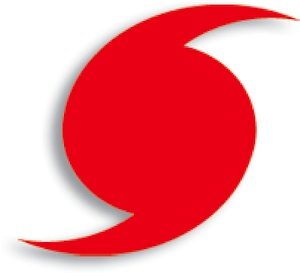 Two established weather entities this past week declared that we’re in for another above-normal Atlantic hurricane season.  Colorado State University forecasters predict 19 named storms, 9 hurricanes, and 4 of them major hurricanes.  They point to the lack of the El Nino effect and warmer than normal subtropical Atlantic Ocean temperatures for the above-normal forecast.  AccuWeather is in agreement, predicting 16-20 named storms, with 6-8 becoming hurricanes, and 3-5 of them major hurricanes with winds exceeding 111 mph.  More importantly, AccuWeather forecasts there will be 4-6 hurricanes that directly impact the U.S.  They also give a “high chance” of a system forming before the June 1 start of the official hurricane season.  The last seven years have seen tropical development prior to June 1.  The National Hurricane Center is still studying the data and considering shifting the start of the season back to May 15, possibly as soon as next year.

If these predictions come true and impact Florida, it will create the ‘perfect storm’ for a property insurance calamity the likes of which we haven’t seen in years, as we’ll explain – up next.