Gilway repeated what he’s said before – that if not for an increase in non-catastrophic water loss claims and AOB disputes that end up in court – Citizens would not be asking for a rate increase at all.   Instead, it’s asking for a statewide average 8.2% increase from insurance regulators, particularly impacting its South Florida customers.  The state’s insurer of last resort insures 23% of homes in Miami-Dade County and 50% of the wind exposure in Monroe County, which includes the Florida Keys.

“The bottom line is this: 97% of our HO-3 homeowners multiperil policyholders will see rate increases in 2019 because of costs related to non-weather water loss litigation.  For 2019, we estimate that half of non-weather water claims will end up in litigation. If we could have held the 12% litigation rate that prevailed prior to the explosion of litigation that began in 2012, our homeowners’ multi-peril indicated rate increase would be reduced from 25.2% down to 1.5%,” said at the hearing held on the campus of Florida International University in North Miami.

In fact, if not for the increased litigation costs, HO-3 policyholders in the tri-county area of South Florida would have seen their premium decrease 2.9%!   Although South Florida accounts for 57% of Citizens exposure, it accounts for 94% of all litigation claims.   Nearly 60% of non-weather water claims there are expected to face litigation at this pace at a final cost that’s five-fold those of non-litigated claims. 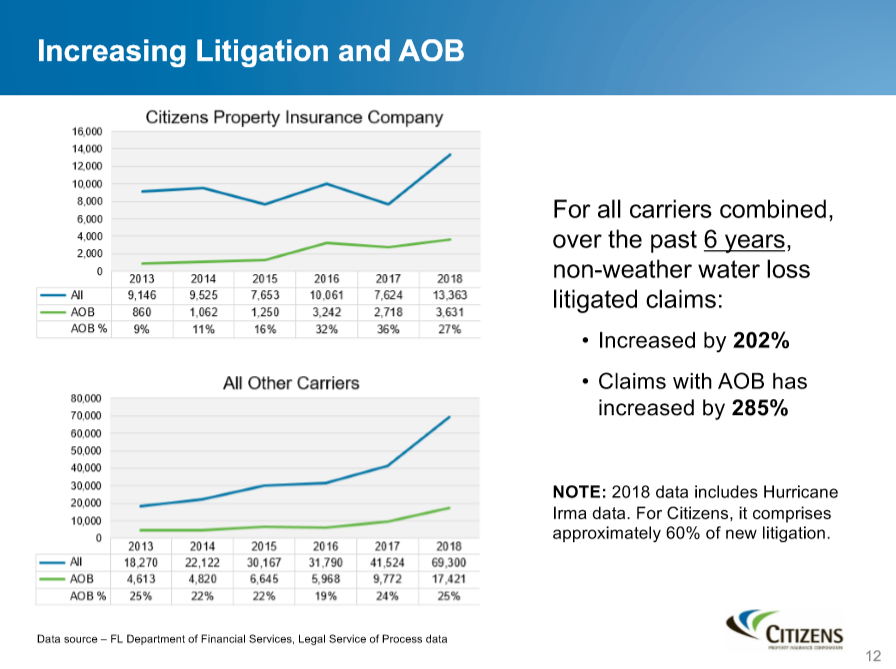 Gilway said that fixing AOB abuse will not solve the costly problem entirely, but will require the legislature to also address the state’s one-way attorney fee statute, which he said “remains the real driver of higher losses and skyrocketing litigation costs.”

You can view more telling charts and read his presentation here.