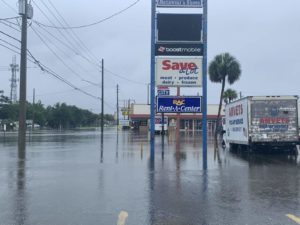 We know that flooding is the most frequent natural disaster in the U.S.  And it’s certainly been raining more in many regions of the country over the past few years, contributing to the problem. Now there’s a report that puts a dollar figure on flood damage caused by “historical precipitation change” – better known as climate change.

The study by Stanford University states that more than a third (36%) of the financial damage of U.S. flooding over the past 30 years has been caused by climate change.  That equates to $75 billion of the total of $199 billion in costs from 1988 to 2017.  Researchers developed more granular modeling to produce what they say is the first precise national estimate of flood damage attributed to changing climate.

“This counterfactual analysis is similar to computing how many games the Los Angeles Lakers would have won, with and without the addition of LeBron James, holding all other players constant,” said study co-author and economist Marshall Burke, an associate professor of Earth system science, in a press release.

Stanford researchers say this same modeling could be used to quantify climate change impacts in other catastrophes, such as wildfires and crop failure.

Also in the news this week: NOAA has put the price tag on the slew of 2020 natural disasters at $95 billion.  In all, there was a record 22 events, from wildfires to hurricanes and flooding, that each had $1 billion or more of losses.