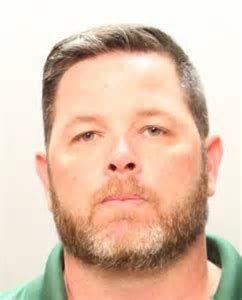 Another contractor has been arrested for an Assignment of Benefits (AOB) insurance fraud and one of his alleged victims is a Hurricane Michael survivor.  Meanwhile, recently released statistics show Florida has maintained the dubious position of number one in the nation for fraud and is home to 18 of the top 50 cities in the U.S. for fraud.  We also rank fourth in the nation in the sub-category of identity theft.

Wyatt Green, owner of Storm Restoration Specialists LLC in Jacksonville, was arrested for allegedly stealing more than $40,000 from consumers who assigned their insurance benefits to him through an AOB contract.  According to the state Department of Financial Services (DFS) Green and his staff allegedly forged customer signatures on construction documents and insurance claim payment checks that required signatures from both the homeowner and mortgage lender.

This case is another example of a bad contractor scamming Floridians and pocketing the money without actually making repairs.  The DFS investigation revealed that Green and his employees purchased 58 false bank endorsement stamps from an online manufacturer to aid in this scam.  DFS says employees of Green also admitted to allegedly forging customer signatures on construction documents required by counties and municipalities.  In some cases, construction work was never completed, and in others the work never even began.

WJXT News4 Jax reports there are several victims of Green’s alleged fraud, including a Lynn Haven owner of two homes damaged from Hurricane Michael.  He told reporters that he signed an AOB with Green’s company and that two insurance checks for more than $30,000 that were supposed to be held in trust, were instead cashed, and to this day, none of the repair work has been started.  You can read and watch the story here as well as this story with another customer from First Coast News.  Green is also under investigation by the Florida Department of Business and Professional Regulation for unlicensed activity as a roofing contractor.

The Consumer Sentinel Network Data Book report by the Federal Trade Commission shows 1 of every 10 Floridians was a victim of fraud in 2018, with the average rip-off amounting to $400.  Florida has the highest per-capita fraud rate in the nation (1,002 cases per 100,000 people), followed by Georgia, Nevada, Delaware, and Maryland.  There were 210,174 cases of fraud in the state last year, amounting to $84.2 million in losses. 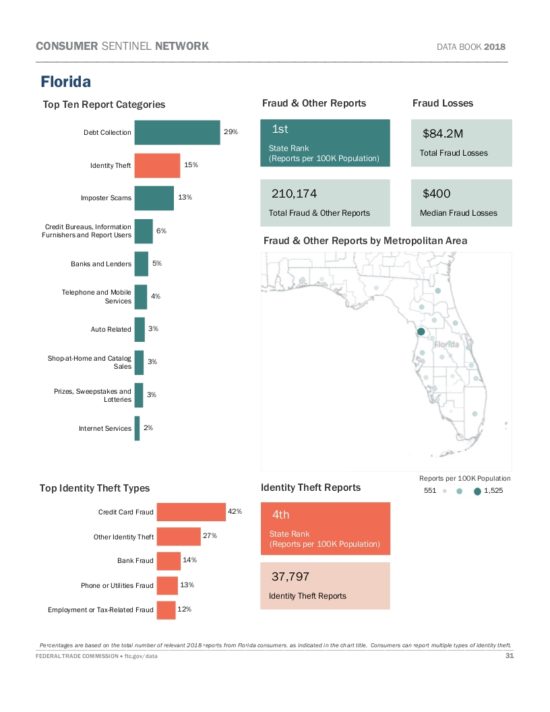 Debt collection fraud was at the top of the categories of different hijinks committed in the Sunshine State, representing 29% of all cases, with identity theft in second place (15%), and imposter scams (13%) in third place.   You can view more details in the chart at right from the report.

The remaining 8 Florida metropolitan statistical areas that made the Top 50 cities in the U.S. for fraud per capita are: