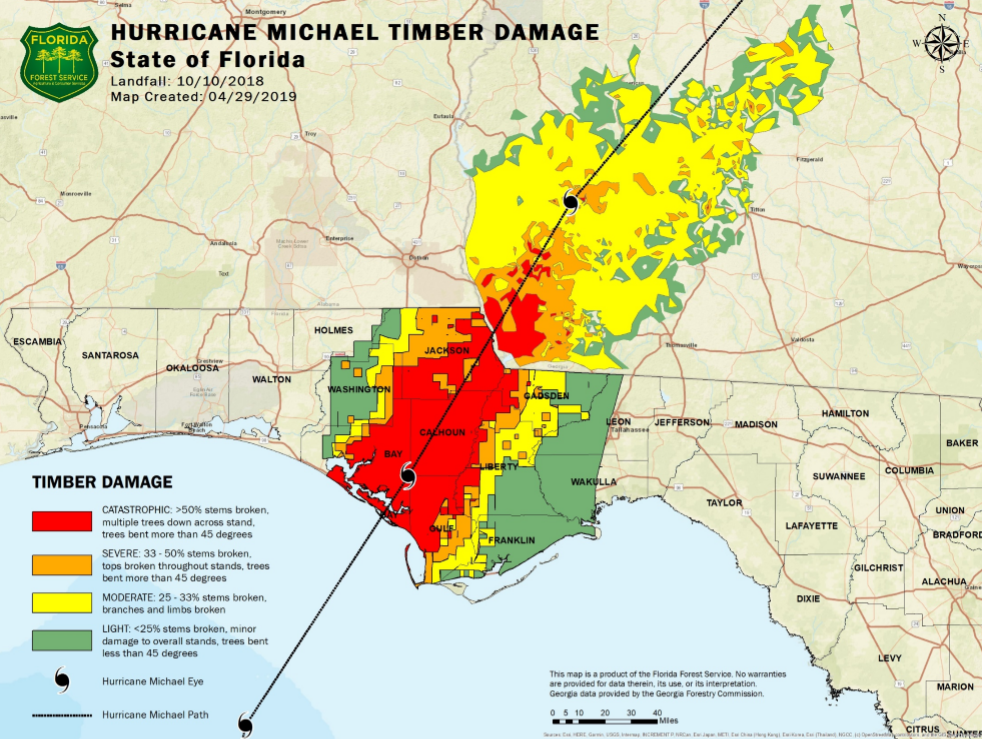 Hurricane Michael Recovery:  Subject-specific federal disaster grants have never been given out to the timber industry until now.  Florida is getting $381 million to help timber growers and farms in the Panhandle decimated by the 2018 Category 5 hurricane.  500 million trees, sitting on 2.8 million acres of timber were damaged, representing 4.4 years of annual harvests, with a value of $1.3 billion.  Crop insurance for trees isn’t common and these family farms don’t have money to replant and wait ten years for the next crop.  The question now: How long will it take for the checks to go in the mail?

Underground Power Lines:  The Florida Public Service Commission is moving forward with its plan to fund a greater number of underground power lines, implementing a law passed by the legislature following Hurricanes Michael, Irma, and Hermine.  The commission last week overcame objections from the state Office of Public Counsel and others that a change in the funding formula would allow for “double recovery” and “inflated” costs being passed along to consumers.  Although utilities will file 10-year plans on such storm protection, they’ll file annually for approval to charge customers for those projects.  Past projects have been funded through base electric rates, which are set for a number of years.

FEMA Contracting Accountability:  The U.S. Senate has passed the Federal Advance Contracts Enhancement Act (FACE), sponsored by Florida Senator Marco Rubio.  The bill would require FEMA to follow recommendations from the U.S. Government Accountability Office (GAO) on advance contracts to “ensure that federal preparedness actions are coordinated to prevent gaps in recovery efforts from occurring.”  FEMA relied heavily on advance contracts to quickly mobilize resources to affected areas in the aftermath of Hurricanes Harvey, Irma, Michael, and Maria, as well as the 2017 California wildfires.  GAO reviewed the program afterward and made nine recommendations to improve contract handling.  The bill now goes to the U.S. House.