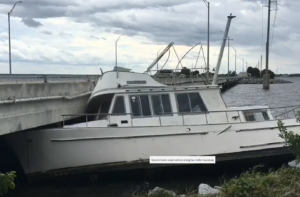 While Hurricane Dorian spared Florida a direct hit, its slow approach and 40-hour long stare-down as it meandered north just 60 miles off the coast cost Florida hundreds of millions of dollars in preparation costs, as well as direct and indirect damages.  While more storms line up in the Atlantic, here’s a look back at the Cat-5 storm that almost was here in Florida.

Because the storm stayed far enough offshore, its main direct effects were tropical storm force winds and modest storm surge on parts of the central and northeast Florida Atlantic coast.  The Florida Office of Insurance Regulation (OIR) as of September 16, estimates insured losses of $18.8 million, spanning almost 4,000 claims.  Brevard and Duval Counties had the most claims, as shown in the OIR-provided chart below, that also shows Dorian was an almost exclusively coastal event.  About 37% of those claims have been closed. 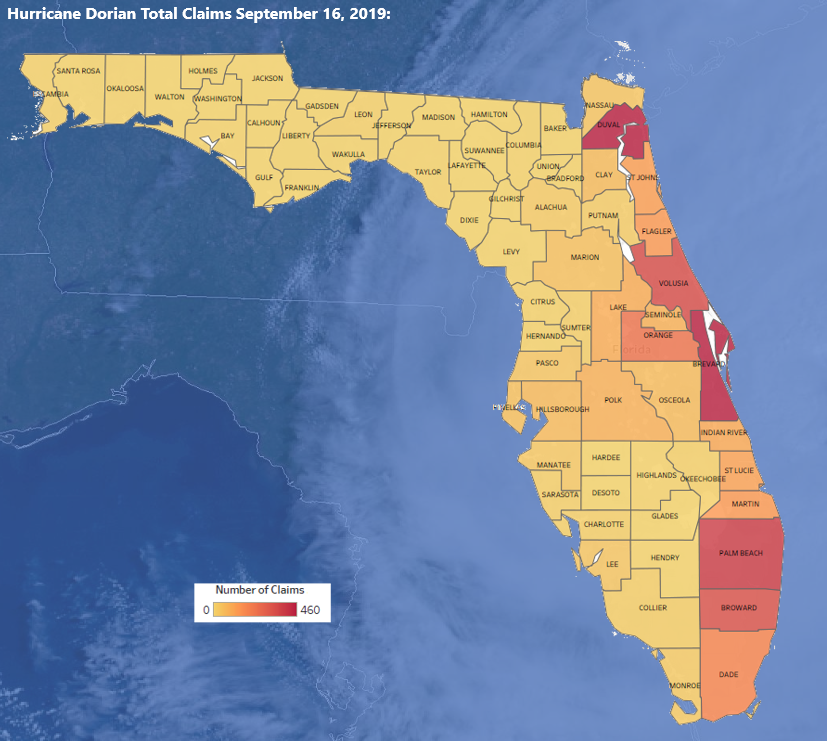 There was damage to some beachfronts, including erosion, as well as to marine property such as boats and infrastructure.  Governor DeSantis has asked the federal government to reimburse the approximately $200 million it cost the state and 24 counties to engage in what ended up being a weeklong preparation, complete with ordering evacuations and opening shelters.  The Governor made clear afterward he doesn’t want local communities to be left holding the bag for all the costs out of concern that budget considerations might otherwise play a role in preparation in future storms.

Of course, Dorian happening as it did over the usually busy Labor Day holiday weekend was a definite tourist downer.  Hotel occupancy was down by almost 42% in Orlando on that Saturday, with only about 70,000 of the 130,000 hotel rooms in the metro area occupied.  To be sure, Florida got off easy, especially compared to the devastation in the Abaco and Grand Bahama Islands, together with the North Carolina Outer Banks.  Catastrophe models estimate insured losses could reach $8 billion from the Caribbean to Canada, with $1.5 billion of that being picked up by U.S. insurance companies and the National Flood Insurance Program. 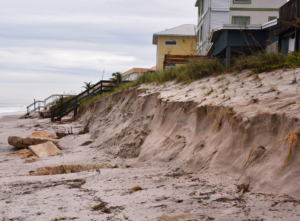 Erosion from Hurricane Dorian on Satellite Beach in Brevard County

If nothing else, you couldn’t have asked for a more realistic drill for most of our 67 counties and the state Emergency Operations Center.  Here at LMA, we did our usual media tours with tips on the claims filing process, including the WMFE-FM Intersection program in Orlando.  Fortunately, Dorian was simply excellent practice and refinement for the next event that can be just around the corner from any lower pressure area this time of year.

I want to thank you for following our Hurricane Updates during the storm.  Our work feels especially meaningful during times of emergency, when our friends and colleagues are hungry for accurate information.