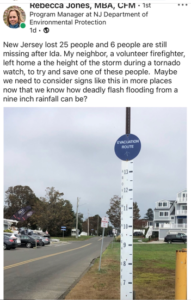 As we prepare to enter the last third of hurricane season (and traditionally the worst third!) the National Hurricane Center as of late last night showed two tropical storms in the Atlantic Ocean – Peter and Rose – but neither are expected to approach the mainland U.S.  Meanwhile, the damage estimates from Hurricane Ida keep climbing, while a different sign of the times has emerged from Ida’s flooding in the Northeast.

AIR Worldwide has updated its models to include Ida’s flooding from the Southeast to the Northeast and estimates that insured losses will now be between $20 billion to $30 billion.  Wind and storm surge losses will account for $17 billion to $25 billion of that amount, plus another $2.5 billion to $5 billion in private flood insurance inland losses.  Not included is National Flood Insurance Program losses.  The Cat 4 storm hit Louisiana on August 29 and spent the better part of the rest of the week creating havoc all the way up to Massachusetts, with more than 80 deaths now attributable to Ida. 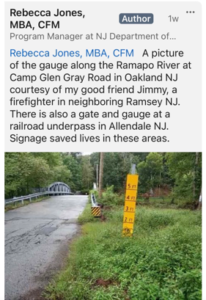 Those of us working in the disaster insurance and recovery space can become exasperated at times trying to educate homeowners and the general public on the dangers of flooding – the most common disaster in the U.S. (and the costliest!).  The LinkedIn post above left is such a wonderful way of illustrating the danger, during both dry times and actual flooding events!  It comes courtesy of Rebecca Jones, who has been a program manager at the New Jersey Department of Environmental Protection’s Trenton headquarters for the past 34 years.  She is also a Certified Floodplain Manager.  Although the combination evacuation sign and flood gauge in the above picture is located in Clinton, Connecticut along the Long Island Sound, Rebecca’s posts reflect her ongoing efforts at finding and using better ways to educate and communicate with the public in her own state, such as the post to the right.  Regarding the signs, Rebecca commented “A lot of people don’t know what to do after they get a National Weather Service flash flood phone alert.  Hopefully, it can get worked into post disaster recovery.”  Amen and proof that some of the simplest ideas are the best ideas!