The prospect for future flooding, especially along parts of Florida’s east coast, remains dim if current sea level & tidal trends over the past few years continue.   An updated report says seas could rise between one and two-and-and-a-half feet on our east coast by 2060, two to five inches more than 2015 projections.  It tops this week’s Environment & Engineering Digest. 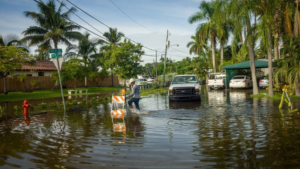 Tides on the Rise:  The Southeast Florida Climate Compact was formed a decade ago by the four South Florida counties (Palm Beach, Broward, Miami-Dade, and Monroe) and two Indian tribes to coordinate and adapt to climate change – including stronger King Tides.  At their recent Climate Summit, they discussed a draft of their updated 2019 report predicting sea levels will be another two to five inches more than their 2015 report projections – if current trends continue.

Their reports are based on literature reviews and generally in line with past NOAA/South Florida Water Management District reports we’ve shared here.  Those reports also emphasize certain change is historically natural and notes uncertainty whether current trends are temporary or longer term.  Regardless, state DEP Secretary Noah Valenstein said recently that sea level rise and how the state is addressing future needs has been brought up by bond rating agencies who base those ratings, in part, on due diligence by state officials.

Sea-Level Rise Task Force:  Julia Nesheiwat, appointed as Florida’s first Chief Resilience Officer earlier this year by Governor DeSantis, is working with the Florida Legislature to codify some of the state’s resilience efforts into law.

SB 7016 would formally create a Statewide Office of Resiliency in the Governor’s Office and create the Statewide Sea-Level Rise Task Force.  Members would include Nesheiwat, state Chief Science Officer Thomas Frazer, and appointees from key state government agencies and the House Speaker and Senate President.   The Task Force would convene in 2020, issue recommendations by January 1, 2021, and sunset in 2023.

At stake, especially from the taxpayers’ perspective and those of insurance and disaster management interests, are the billions of dollars invested in infrastructure each year.  Smart investment, utilizing the best factual information possible, is smart policy.

Train Deaths:  Brightline has announced that it will utilize the latest engineering technology, including testing drones and infrared fences to reduce suicides occurring along its 67 mile high speed line from West Palm Beach to Miami.  An Associated Press analysis found the train, which travels as fast as 79 mph, has the highest death rate among the nation’s 821 railroads, at one every 29,000 miles.

Forty people have died since service started in January 2018, most of them suicides and the rest careless motorists, bicyclists, or pedestrians.  Brightline is turning to high-tech solutions to help reduce deaths.  The company announced it will launch a fleet of drones with two-way communication to find and talk to people lingering along the tracks and notify nearby train crews.  Infrared motion detectors will also be deployed.

The company plans to open a higher speed (up to 125 mph) line between West Palm Beach and Orlando in 2022.