We’re in an all-too familiar place again this morning as we wait for another storm to hit Florida.  As of late last night, hurricane warnings were posted for all of the Florida Keys for the arrival of Eta over or near the Keys by this morning as a strong tropical storm.  It’s expected to become a hurricane as it heads northwestward into the Gulf of Mexico later today into tomorrow.  Tropical storm warnings extended halfway up both Florida’s east and west coasts.  Eta will be only the ninth tropical wave to hit Florida in November in the past 100 years, in which Verisk recently identified 2020 as another record-setting year for catastrophes in the U.S.

Governor DeSantis declared a state of emergency on Saturday for our eight southernmost counties, including populous Miami-Dade County.  Shelters opened in Miami and the Keys for residents in low lying areas and mobile homes.  As of late last night, no evacuations had been ordered.  Upwards of 6-10 inches of rain are currently forecast and there was already flooding occurring in Broward and Miami-Dade counties last night.  The forecast track shown below was as of 10pm last night.  See the latest updates & forecast track here. 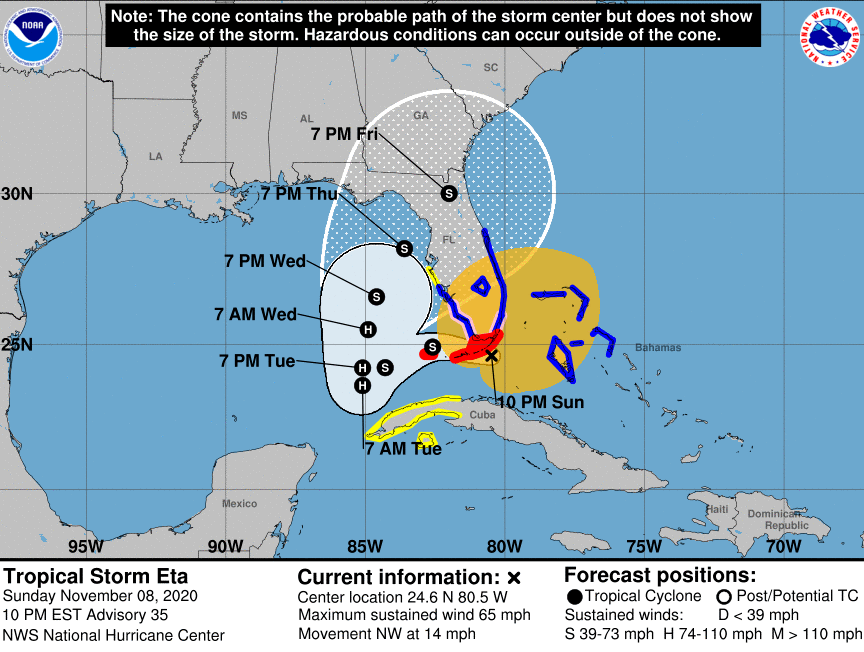 The forecast models show a wide range of slow swaggering tracts in the Gulf of Mexico.  So likely, this will be another week of “guess where the hurricane is going” – a game we’re all weary of playing.  As a Cat-4 storm last week, Eta carved a path through Nicaragua, Honduras, and Guatemala, killing dozens of people, before crossing the Caribbean Sea and striking Cuba yesterday.

So how common are November storms in Florida?  We’ve had only eight tropical cyclones hit in the past 100 years – four of them growing into tropical storms and two of them into hurricanes.  Our friends in Florida’s Panhandle will remember Hurricane Kate, which came ashore in 1985 as a Cat 2, destroying more than 300 homes.

Eta will become the 12th named Atlantic storm to make landfall in the U.S. this year (beating the previous record of nine set in 1916) and the 28th named storm of this very busy season.  Property Claim Services (PCS), a Verisk division, has designated 2020 as another record-setting year for catastrophes in the U.S., surpassing 2019 with more than 60 catastrophe events.  These are events that surpass a designated limit of insurance market losses.  They include the Puerto Rico earthquake in January, the wildfires and floods of the spring and summer, and the numerous storms and hurricanes.  PCS also reports a record number of events exceeding $1 billion, with 15 so far.

The insurance-linked securities (ILS) and reinsurance markets listen closely to what PCS analysts determine, for their data impacts aggregate deductible, covers, risk-transfer, and the like.  These ultimately dictate future rates, too.

Meanwhile, AIR Worldwide estimates that the last hurricane, Zeta, which struck Louisiana on October 28, will create insured losses of between $1.5 and $3.5 billion.  Zeta struck the previously battered Louisiana coast as a Cat 2 hurricane and moved on through Mississippi and into Alabama.  The western Panhandle received some tropical storm force winds as it went by.

So someone please tell Mother Nature that hurricane season is winding down, as it’s officially over on November 30.  Or is it?!