Recent news that FEMA is delaying its new Risk Rating 2.0 structure in the National Flood Insurance Program (NFIP) for another year won’t impact planned double-digit premium increases beginning in April 2020.  Meanwhile, progress is being made to produce a private flood insurance model act that states can adopt to encourage private market alternatives to the NFIP.

Congress – which is on its 13th consecutive short-term extension of NFIP reauthorization – and the NFIP leadership have butted heads for months on whether NFIP had the regulatory authority to move ahead on its own with more realistic, actuarially-based rates under the 2.0 program.   The NFIP is $20.5 billion in debt as a result of recent, more severe disasters and the fact its rates subsidize coastal residents’ true risk – including Floridians – who as a whole represent 34% of the NFIP’s 5.1 million policies.

Recent pressure by Congress and the upcoming election year, pushed FEMA to announce it will delay the new rates under Risk Rating 2.0 until October 2021 instead of October 2020.

“Some additional time is required to conduct a comprehensive analysis of the proposed rating structure so as to protect policyholders and minimize any unintentional negative effects of the transition,” according to a FEMA news release.  “Additionally, this extension allows for all National Flood Insurance Program (NFIP) policies – including, single-family homes, multi-unit and commercial properties – to change over to the new rating system at one time instead of a phased approach, as originally proposed.”

Even so, some NFIP rates will be going up in 2020.  A recent FEMA bulletin notes that “nearly 80% of policyholders already pay a full-risk rate.”  For the remaining 20%, FEMA says that beginning April 1, renewal premiums will increase an average of 11.3%.  That doesn’t include the 2015 HFIAA Surcharge or the Federal Policy Fee.  On top of that, the Severe Repetitive Loss Premium is rising 10% for those properties of the same name that keep flooding and being repaired or rebuilt over and over again.  (They’ve also revised the NFIP Flood Insurance Manual.) 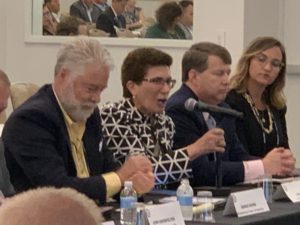 On the private flood insurance scene, we are getting ready for next month’s National Council of Insurance Legislators (NCOIL) meeting.  A compromise draft of the Private Flood Insurance Model Act will get its first reading.  The hang-up has been over the role insurance agents should play in educating policyholders on pricing of NFIP and private policies.  We’ve been pushing for an active role, given the large number of Americans who don’t know they live in flood hazard areas, let alone still don’t understand that homeowners insurance doesn’t cover flooding!  The draft language requires “producers” notify applicants that flood polices – public and private – exist.  We applaud NCOIL for this compromise bill!