For years, FEMA’s National Flood Insurance Program (NFIP) has been asking Congress for more resources, not the least of which, for help handling the back-to-back-to-back big disaster years of 2017 through 2019.  So it’s no surprise to hear that FEMA is not meeting its own requirements in monitoring high-risk communities across the country taking part in the NFIP.  Here in Florida, FEMA visited only 13% of those communities every five years and in Texas, just 5% of those communities in that period.  As we know, flooding is the primary cause of disaster-related damage in the U.S.

Until 2019, FEMA’s goal was to visit all high-risk communities every five years to make sure they are complying with federal flood regulations.  In some cases, FEMA failed to visit them even once during the 11-year period of 2008-2019 in the review. 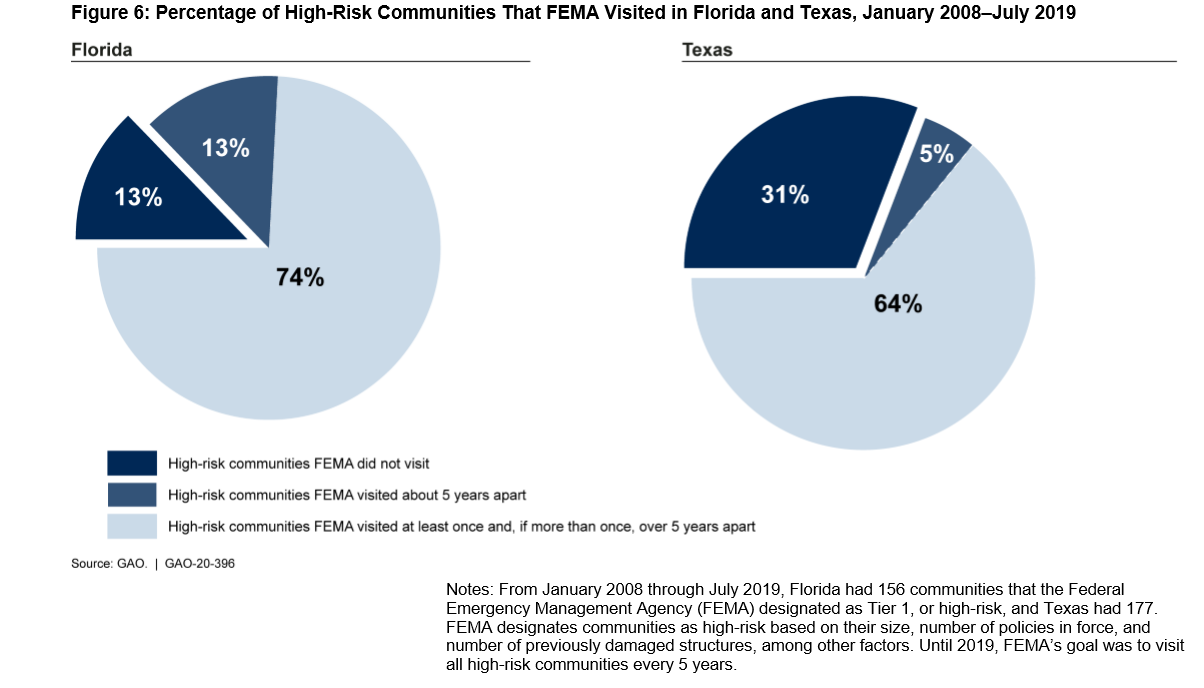 “Without regular monitoring, FEMA’s ability to ensure communities comply with requirements is limited,” GAO reported.  “FEMA and state specialists also are to close out records of these visits in FEMA’s tracking system if they find no deficiencies or violations, or when the community has resolved any issues.  However, in Florida and Texas GAO found that records for many visits remained open for several years, and FEMA staff were unsure whether this indicated unresolved deficiencies or incomplete recordkeeping,” according to the report.

FEMA officials told GAO that one reason for the limited number of visits is staff resources, especially when they have to be diverted to help in actual disaster recovery efforts.  FEMA also said “it is a challenge to visit all high-risk communities in states with a large number of NFIP communities, such as Texas and Florida, but they generally do not have the same challenge in states with fewer communities,” according to the report.

Another unknown: FEMA hasn’t been generally collecting or analyzing follow-up assessments on properties with substantial flood damage (50% or more of the property’s value), limiting its ability to ensure the process operates as intended.  “Furthermore, FEMA has not clarified how communities can access NFIP claims data. Such data would help communities target substantial damage assessments after a flood,” GAO noted.

The report notes that FEMA agreed with the GAO’s findings and recommendations and said it was working to implement solutions.