Minimum wage increase, but no pot 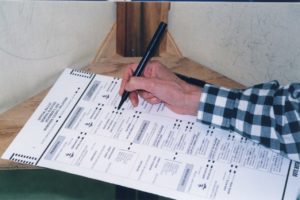 Photo by Kristen Price from FreeImages

There are two proposed state constitutional amendments that will be on the general ballot this November 3 with two others still pending approval by the state Supreme Court.   While some of the more interesting measures, such as legalizing the recreational use of marijuana, failed to collect enough citizen signatures to qualify for this year’s ballot, others, including raising the state minimum wage to $15 per hour, will be up for a vote.

On the ballot:  There are two measures currently approved for the November ballot.

Amendment 1 – Citizenship Requirement to Vote in Florida Elections:  The proposed amendment would simply change one word currently in the state Constitution: “Every.”  The Constitution says “Every citizen of the United States who is at least eighteen years of age and who is a permanent resident of the state, if registered as provided by law, shall be an elector of the county where registered.” The proposal would change “Every” to “Only.”  Backers say it’s necessary to ensure, without doubt, that only legal citizens qualify to vote.  Opponents say it’s unnecessary and stigmatizing.

Amendment 2 – Raising Florida’s Minimum Wage:  The proposed amendment would incrementally increase Florida’s current minimum wage of $8.56 per hour to $15 by the year 2026.   If passed, the minimum wage would go to $10 on September 30, 2021 and increase by $1 each year through 2026.  Right now, Florida’s minimum wage is upwardly indexed to inflation.  Amendment proponents say it’s necessary to ensure each Floridian a living wage.  Opponents say it’s unnecessary given the entry-level nature of such jobs and will cost business and consumers through higher-priced goods and services and could cost full-time positions.

Pending Approval:  There are two other measures that still await a decision by the Florida Supreme Court on whether they will be on the November ballot.

Amendment 3 – All Voters Vote in Primary Elections for State Legislature, Governor, and Cabinet:  This proposed amendment would create open primaries, allowing voters to cast ballots in all primary elections, regardless of their party registration.  A ruling by the state Supreme Court on the ballot language is pending.

Amendment 4 – Voter Approval of Constitutional Amendments: This proposed amendment would require all future constitutional amendments be approved by voters not once, as has been the practice, but twice in consecutive general elections.  A ruling by the state Supreme Court on the ballot language is pending.

For a complete list of past, present, and future ballot initiatives in the works, you can visit the Florida Division of Elections’ Initiatives/Amendments portal.  As we get closer to the November 3 General Election, we’ll feature each of the approved ballots in more detail, here in our LMA Newsletter.