The second quarter financials from insurance companies doing business in Florida were due this past Friday to the Florida Office of Insurance Regulation (OIR) and we are awaiting a cumulative report on underwriting gains/losses.  The first quarter saw $2.5 billion in total homeowners insurance rate increases.  At least 8 carriers filed increases in excess of 15% (some as high as 28%) and another 6 companies filed increases of less than 15%.  Only a very few filed rate decreases.

To those who dismiss this as “only a 12% average increase,” this is clearly going to negatively impact consumers.  As Florida’s Consumer Advocate Tasha Carter put it at a winter OIR rate hearing, that type of increase can amount to $30 per month for some policyholders, the equivalent of a tank of gas for the family car at a time when Floridians are on tight budgets due to the coronavirus economic downturn.

State Senator Jeff Brandes (R-Pinellas) summed it up in this tweet last week: 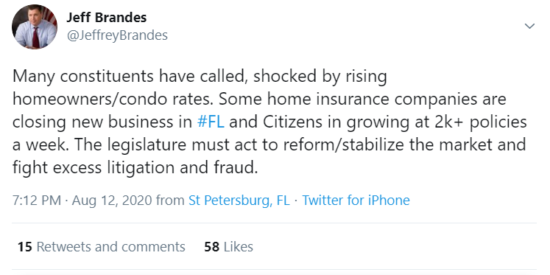 So why are we steeling for second quarter financials to be worse?  It’s the upward cost pressures on carriers, including higher reinsurance costs and incurred but not reported losses for many carriers from 2019.  These include claims creep (delayed reporting of claims from the 2017 and 2018 hurricanes), increased litigation costs, and worse than anticipated weather claims.  These factors cause insurance companies to have to increase their reserves going forward or look for ways to reduce their exposure (including cancelling or non-renewing policies).

The Tampa-based insurance litigation analytics firm CaseGlide predicts a final wave of claims are on the horizon between now and September 10, the three-year statutory deadline to file claims from 2017’s Hurricane Irma.  But the statute of limitation on new Irma lawsuits isn’t up until September 2022.  Its analysis, shared with Trading Risk, notes that the number of new suits filed against Florida’s 17 largest primary property carriers dipped to just under 4,500 in July.  While that’s down 3% from the previous month, it’s the second-highest recorded this year.

“Meanwhile, new assignment-of-benefit (AOB) cases reached a six-month high in July.  New AOB lawsuits had been declining in the lead-up to May 2020, but have been rising since then and accounted for nearly a quarter of all reported lawsuits last month,” according to the article.

I invite my readers to sign up now for tomorrow’s webinar by Demotech, the financial analysis and ratings firm that specializes in evaluating Florida’s property insurance companies.  The session, titled “A Tale of Two Tails,” will feature a plaintiff and defense attorney discussing their different views on insurance claims lawsuits and the cost-consequences involved in protracted litigation.  I’ll be part of the panel along with Paul Handerhan of the Florida Association for Insurance Reform (FAIR).  It will also include a roundtable discussion with other stakeholders, including CaseGlide’s Wesley Todd, sharing how best to convince the Florida Legislature to take action.  Tomorrow’s webinar is the second of a four-part series hosted by Demotech this hurricane season.

We will likely get more insight as well on these second quarter financial report filings.  You can register for this free webinar by clicking here.  We hope to see you there!